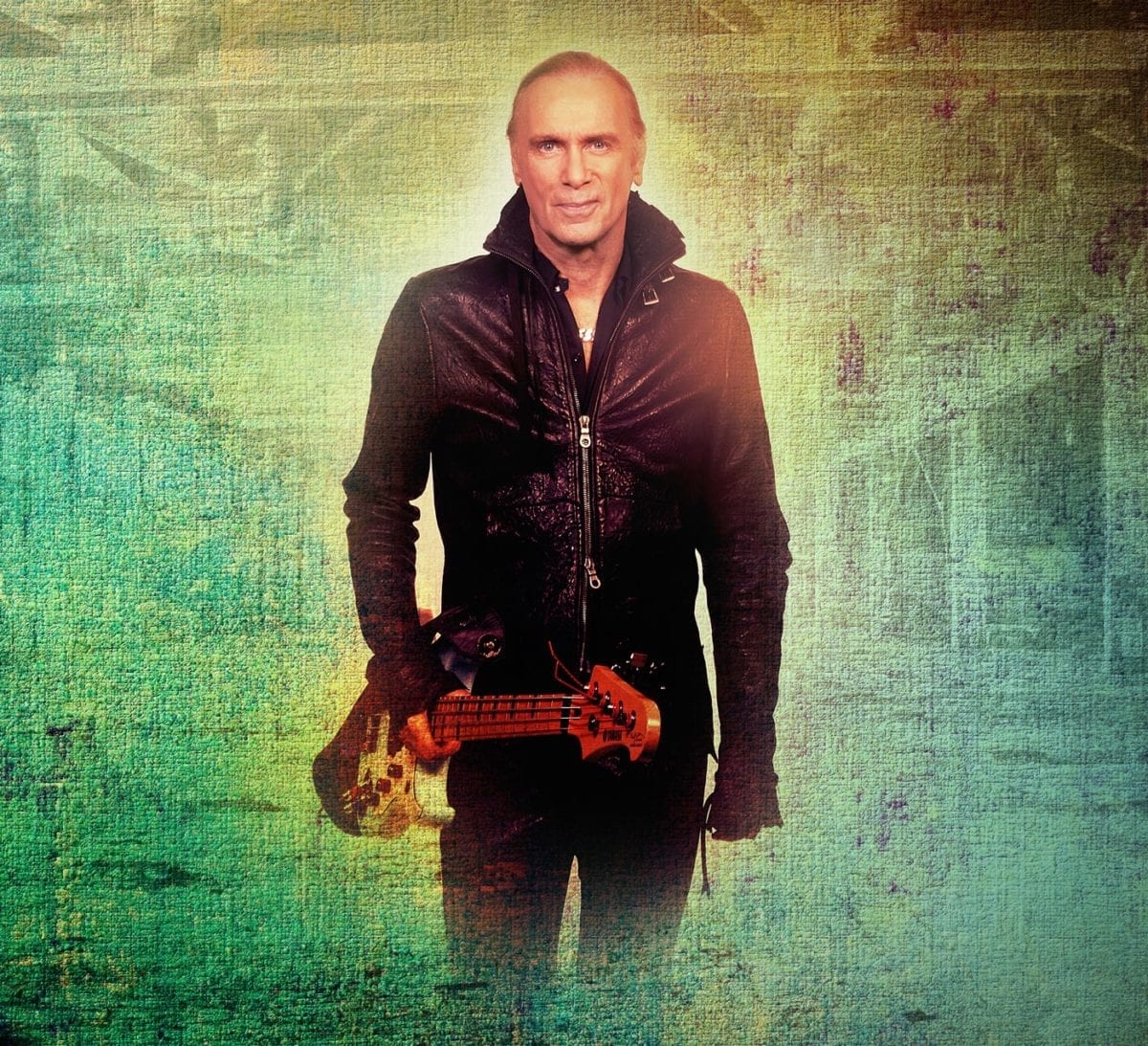 “None, we just wanted to make a record,” explained Billy Sheehan, bass player for Mr Big on the goals for their recently released album, Defying Gravity. “We’re never ones to plan things or map things out or strategise or discuss genres or styles or whatever. We just got together, came up with some songs, and laid it on there. I think after the fact, people analysing things think we do that because we have that question quite often but we just get into a room and let nature take its course and whatever position we are in emotionally, musically and stylistically, that’s what we get out of it.”

Defying Gravity was recorded in just six days under the watchful eye of producer Kevin Elson, with Sheehan shrugging when pressed on the unusually short time the album took.”

“It was quick,” he laughed. “I had a great conversation with Robert Fripp one time years ago, and he told me that the first King Crimson record, The Crimson King, was done in a week in somebody’s living room, so it is possible (laughs). I know in the early days of Van Halen, they would just go in and do it. In the early days of The Beatles, they would just take a break from touring, go in the studio and cut a single, and they would be done in a day, so it’s not entirely unheard of.”

After working with Elson on their self-titled debut in 1989, then again on 1991’s Lean Into It and 1993’s Bump Ahead, Sheehan says returning to where it all started for the band was a reinvigorating experience.

“I think getting the same team together brings us back to square one, but also all of us have lived a lot of life. We’ve been through a lot musically, technically, personally, and emotionally, so I think all of those things reflect in the finished music. But Kevin is a great producer in that he makes things easy. It’s fun and enjoyable, and there’s never a controversy. He will allow the band to – if we feel strongly about something, then he will go with it – and if he feels strongly, we say, ‘Yeah, maybe you’re right Kevin, let’s do it that way’. He has great roots deep into rock and music. He grew up with the guys from Lynyrd Skynyrd and was their sound man for years and toured with them from the very beginning. And then, of course, he was with Journey for their best-of-the-best and is one of the best live sound mixers in the world. He’s very, very highly paid. We couldn’t afford him anymore after using him on our first couple of albums. He’s out of our price range now (laughs).”

Sheehan says Mr Big fully utilized that experience in live recording with Defying Gravity, and as a result, the sound captured is a truer reflection of the individual talent within the band.

“It’s quick, it’s alive, and there’s a good kind of pressure,” he reflected on recording the album live. “Sometimes it’s quite a release of pressure when you know you can do multiple takes and spend as much time as you want to get a lick or a riff, so there’s no pressure. Whereas if you go into the solos on Lean Into Me, we were kind of, ‘Okay, here goes. Go‘ (laughs). There wasn’t a lot of time to overdub or fix or you had to hit it. And, in a way, that’s a good kind of pressure. It also separated the men from the boys – or the women from the girls – in the fact that you have to have it together. You have to know what you’re doing and what you’re playing and how you’re doing it, and it requires some expertise from you. Whereas, nowadays in the studio, you can get a pretty untalented person who can barely sing, get a song that is nowhere near together, and in a couple of hours with cutting and pasting and some digital trickery you can make an amazing sounding piece of music. But for me, I don’t know if there’s really a spirit or life in that. I’ll let the listener make that decision but what we did on Defying Gravity is we went in and we played, and that live pressure – to know that we only had six days where we’re all in the same city at the same time – so we’ve gotta get it done. The last day was a little bit of a panic because we needed two songs and we only had one, but somehow we pulled it off.”

Sheehan put Mr Big together in 1988 after performing with David Lee Roth on his first solo album, Eat ‘Em and Smile, before leaving the band. It was a move that was risky at the time but eventually paid dividends.”

“When Eat ‘Em and Smile was released, I wasn’t just in Dave’s backing band,” he corrected, “We were all in the band, and everyone was a band member. Dave, myself, Steve and Greg, we were all in the photos, and we all did the interviews. By Skyscraper, it had turned into a backing band. It was Dave and those guys behind him. I love Dave, and I would be happy to be in his backing band anytime, anywhere, but also the nature of the music was changing, and it was an experiment. If it had worked, Dave would have been the king of the world, and it very well might have. But, he decided to go a little more towards dance because he saw that dance – and as we know now: hip-hop, that barely existed at that point – is just enormous and giant. Dave was smart to think if we could catch that wave, it might be awesome. So a lot of songs on that record had an artificial kind of dance beat, but it was just not my thing. We were no longer happy. Plus Skyscraper was not done the same way as Eat ’em and Smile where we were all in a room together and did it very much like we did Defying Gravity. With Skyscraper, everyone came in separately and it was not much fun, so we parted ways with all respect to Dave and everyone. I love the man, and I would work with him in any capacity at any time. So what I did with Mr Big was put it together with the same way as we did for Eat ‘Em and Smile, which was everybody had a share. Everybody was part of the band and had an opinion, and we could hang together and have a good time and be on tour and enjoy each other, so that was pretty much a continuation of the spirit of Eat ‘Em and Smile, with, of course, different players who made a much different record.”

Mr Big didn’t have huge commercial success with their first album. In fact, it wasn’t until the follow-up, Lean Into It, that people started to sit up and take notice.

“I think the debut just got released in a very crowded market place,” Sheehan mused. “There were a million bands that picked up on forming a band out of guys from other bands and putting out a record, so we kinda got lost in the sauce. By the time Lean Into It came out, most of them had broken up or gone away, but we were still there. So, I think finally some attention went on the band, and then our manager Herbie (who is single handily responsible for our success), he made sure that “To Be With You” got on the radio and got working in spite of resistance from the record company – which is sung about in the song “1992” – and in spite of great resistance from the label, we had a hit record and that changed everything.”

The Mr Big train derailed temporarily in 2002 with the band parting ways, mainly due to the constant nature of the music industry in that era.

“We had been under a lot of pressure,” Sheehan admitted. “It was non-stop. Finish the tour, go into another record, go out on tour right away, come home and do another record and it was – as any band will tell you – it starts to get rough. You need to take some time in between. For example, with The Winery Dogs right now, we’re taking some time before we do our next record. We did two in a row and two tours in a row, and it was wonderful and great, so let’s not make the same mistake and let’s take a break. Richy, do your thing. Mike, do your thing, and I will do my thing and I will see you guys when we’re ready to go again which is fantastic. I wish we had done that with Mr Big. I think if we had had, we would never have split up. In the meantime, these things happen, and sure enough, we got back together again, and the most amount of trouble we had in Mr Big was somebody gave somebody else a dirty look (laughs). I hear about other bands and their problems, and I can’t believe how easy we had it. You hear about people on heroin or divorce and crazy situations and fist fights, but we never had a situation that bad. When we got back together again, we laughed off all of the things that we went through in the early days that would have been perceived as being negative, but they weren’t so bad at all (laughs). We are enjoying our time together now very much.”

When the band reformed in 2009, Sheehan admits it was more through fan pressure than a collective band decision to reignite the flames.

“The pressure from fans was huge,” he laughed. “All of us, no matter where we went, somebody would ask if the band was getting back together. So, no matter what, Paul would get it incessantly. Eric and Pat would get hit up all the time, and after my shows; playing in other bands. I would invariably get a guy with a whole pile of Mr Big records wanting them signed and asking when we were getting back together. So, sure enough, we buckled under the pressure (laughs) and said, ‘Why not?’ We’ve never been money motivated, but the idea we would play together and see an ocean of smiling faces out in front of us made us happy so we did, and I’m glad we did. Again, we’re doing a relaxed schedule. We put out a record and tour and see each other again when we do. Months go by, even maybe a year, and it’s like: ‘Hey, do you wanna do it again?’ (laughs). So it’s not like the constant pressure of making a record, tour, repeat cycle, and as a result, I think we make better records too, and people appreciate it because we’re not grabbing as much cash as possible by slogging ourselves everywhere. We could make more money if we did it harder, but as I said, we’re not money orientated.”