Melbourne punks Clowns are thrilled to announce the local supports for their upcoming Lucid Again Australian Tour, joining main supports Night Birds (USA) for 10 shows across the country this June. The national tour is in celebration of their upcoming third LP Lucid Again, out on May 12 via Poison City Records.

Tickets to all shows are on sale now via clownsband.com. Lucid Again is available to pre-order digitally or on vinyl via Poison City Records.

Fresh following a European tour throughout April including a performance at Groezrock for the second year in a row, the Lucid Again Australian Tour will be the first chance for Clowns fans to hear blazing tracks such as ‘Dropped My Brain’ and ‘Pickle’ from Lucid Again up close and personal in an explosive and frenetic live show.

Opening proceedings for the first night of tour will be Meat Bikini and Swamp Donkey in Cairns, followed by grunge-rockers Acid City in Darwin and Axe Girl and Two For Flinching in Perth. The Wrath and The Lost Cause are on support duties on the Gold Coast, with Shutup! Shutup! Shutup! and The Cutaways opening in Brisbane and Rort Menace and Wavevom kicking things off in Newcastle. Joining the lineup in Sydney areNunchukka Superfly and Neptune Power Federation, while Stabbitha and the Knifey Wifeys and The Lizards will do the honours in Adelaide, followed by Cashman and more acts to be announced in Hobart. Rounding out the announcement are Amyl and The Sniffers and Poison City label-mates TV Haze for the final night of tour and their hometown show in Melbourne.

From modest beginnings as suburban Melbourne house-party punks, Clowns – Stevie Williams (vocals), Rod Goon (guitar), Jake Laderman (drums) and new additions Hanny J (bass/vocals) and Will Robinson (guitar) – have become an undeniable and unstoppable force within the Australian music community. With two critically acclaimed albums under their belt, namely I’m Not Right (2013) and 2015’s follow up Bad Blood which took out #1 in triple j Short.Fast.Loud’s yearly album poll, Clowns have garnered a reputation for their explosive and frenetic live performance. They’ve sold out headline shows across Australia, Europe, North America and Asia, shared the stage with punk icons such as Descendents, Rise Against and NOFX, and performed at international festivals including SXSW, Riot Fest and Groezrock to name a few. 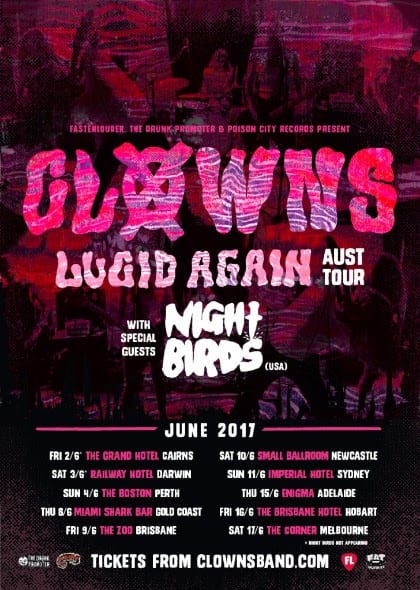