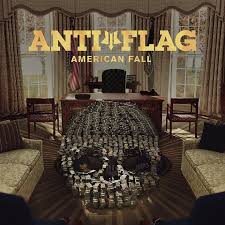 For a band that has never been afraid to say how they feel about the world, 2017’s political landscape has given Anti-Flag plenty of ammo for their 10th studio album, American Fall.

Making a conscious decision to put over their message in a way that doesn’t depress the listener, the band’s decision to bring in Good Charlotte‘s Benji Madden as co-producer is a masterstroke. The result is an album packed full of massive hooks and sing-along anthems that conveys the band’s rather grim outlook on the world, whilst almost tricking the listener into thinking it’s all feel-good punk rock.

Album opener, “American Attraction” is also the first single to be taken from the album and sets the pace well, drawing you in right from the start. It’s so catchy it’s almost impossible not to nod along, and it’s chanted chorus doesn’t require too many repeat listens to have you singing along.

“The Criminals” is a highly charged anthem that ends with the extremely powerful statement, “We’ll never have our dignity / Til all you fascists are six feet deep”. It’s certainly a song that doesn’t hold back, and after describing a divided world with monetary gain put before humanity, the breakdown of the song is a call-to-arms to fix all those evils.

With the chorus introduced as an acoustic intro, “When The Wall Falls” almost instructs you to sing along with your very first listen. The band almost go into ska territory with its bouncy verses before it’s stomp along chorus. “Trouble Follows Me” is almost a welcome break from the political messages and is a pretty standard punk rock anthem. As its title suggests, it’s angsty but the jump along nature of the song leads me to think it will be a live favourite.

“Finish What We Started”, compared with the other songs on American Fall, has a slower pace that lulls you into a false sense of security for its shout along, fist-pumping chorus. Clocking in at just under 2 minutes, “Liar’s” non-stop assault leaves you totally breathless before “Digital Blackout” takes the album to its heaviest depths.

As you’d expect from its title, “I Came. I Saw. I Believed”, gives the album its most rousing anthem. “Racists“ was the first song to surface from Anti-Flag for two years when they released the lyric video in response to the violence in Charlottesville, calling out people’s ignorance and prejudice. This ties nicely into “Throw It Away”, lamenting the privilege of people of who “have been handed everything”.

The upbeat, defiant “Casualty” rounds off the album well and tips the album just over the thirty-minute mark. This gives Anti-Flag enough time to get things off their chests, and with the rousing nature of most of the songs, doesn’t overburden the listener despite it touching on some tough subjects.