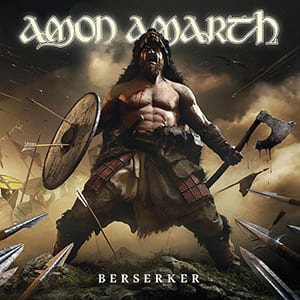 At thirty years into their career things couldn’t be going better for the mighty Swedes Amon Amarth. The band are touring alongside heavy metal royalty in the likes of Cannibal Corpse, Lamb Of God and Arch Enemy. They have also been selected to play with the legends themselves – Slayer – for their final tour of the United States.

Now as if that doesn’t see enough joy for the fans of a band that now deserve to be listed as royalty themselves May 3rd sees the release of what well maybe the best Amon Amarth album to date. With Beserker we see a freshness to the band that seems to be dormant for awhile, and I find the only way to describe this album is as a heavy metal masterpiece.

As you take a listen to the album you realise that this is also perhaps one of the band’s most daring albums. There is nothing that the band seems afraid to attempt anymore and if you are one of those people that likes to say that death metal is stale then you may want to give Berserker a little because this new experimental side of Amon Amarth breathes a definite new life into the genre.

Opening track ‘Fafner’s Gold’ sees that experimental side come out to play straight away. There is an almost folk metal opening at hand that then gives way to the amazing screaming guitars of Olavi Mikkonen and Johan Soderberg and then comes the brilliant vocals of Johan Hegg to round out the excellence. Some spoken word about dragons just adds cream to the cake of a band that knows how to deliver mythology like now other.

The freshness of Berserker is there for all to see with the catchy melodies and riffs of ‘Crack The Sky’ and then the sounds of a hammer being forged announces the arrival of ‘Mjolner, Hammer Of Thor.’ Here newcomer Jocke Wallgren hits his strides on the skins while you soon realise just how guitar heavy this album again as the fearsome axe twosome again show some utter brilliance.

There is a heavy reliance on guitars throughout the album – but hell when you have two axe-men at their peak like Amon Amarth do here why wouldn’t you play to your strengths. That strength sees moments of sheer brilliance on ‘The Beserker At Stamford Bridge’ while ‘Into The Dark’ stars with a guitar solo that would have Brian May clapping in the aisles. Then there are the blistering riffs of ‘When Once Again We Set Our Sails’ and the epic guitar battle that breaks out in the middle of the brutality of ‘Wings Of Eagles.’

You also get a strong feeling that this is an album that is going to deliver a few fan favourites along the way as well. One listen to ‘Shield Wall’ and you find yourself singing along before putting it on repeat to really get into it. Likewise there is also a catchiness with ‘Raven’s Flight’ and you just know that these two tracks are going to be on Amon Amarth’s set list for years to come.

It is the willingness to try new things thoughout the album though that gives Berserker its masterpiece tag. The sweet piano playing that suddenly invades ‘Valkyria’ and the fact that ‘Ironside’ seems to drift from a real tribal feel at one moment before Johan Hegg goes into some beautiful folk vocals shows a band willing to do whatever it takes to make a track work. Given that the rest of ‘Ironside’ has Hegg delivering growls so deep they sound like they come from the pits of hell and you also start to realise that he is one of the best frontmen going around at the moment.

Yes it is true Amon Amarth have delivered a masterpiece with Beserker. This is an album to cherish as it is something that you will still be listening to in twenty if not thirty years time. These Swedish giants have delivered an album that will last well into the ages.