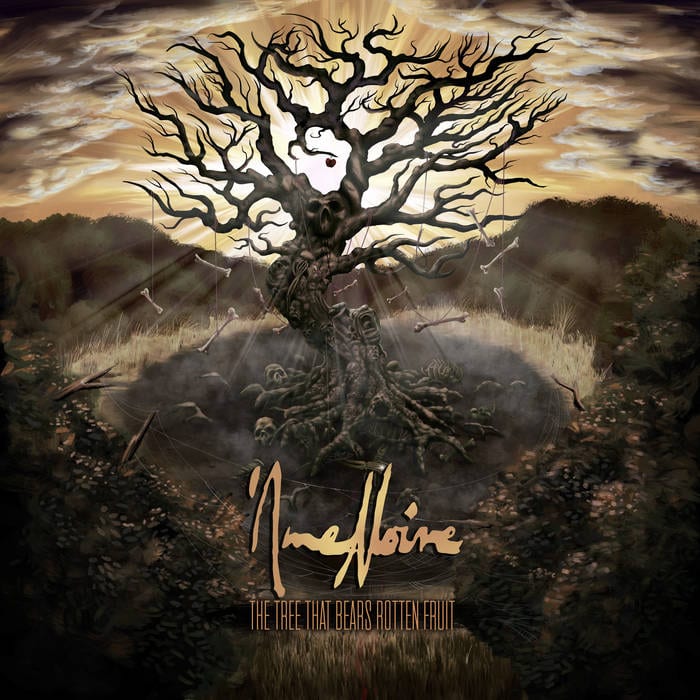 For a band whose name literally translates into ” black soul ” (something I relate to), I knew instantly that I would love them; and I was right.  Melbourne’s Ame Noire rose from the ashes left by the members’ former bands, which eventually led into the melancholic black metal outfit. Formed in the latter half of 2016, the five-piece from Melbourne embarked on a new path, one that saw them moving in a different direction from where they had been before. Almost two years, and many live shows later, the band unleashes their debut offering ‘The Tree That Bears Rotten Fruit‘  to the world on the (un)auspicious day of Friday the 13th.

Our journey with Ame Noire begins with the EP’s opener “What Lurks Below“, reminiscent of an old art horror movie initially with its eerie atmospheric sounds and leading into a relentlessly heavy, emotion-driven track that sets a brutal tone for the rest of the release. With tremendously fierce gutturals filling your ears, you can only marvel at the insane vocal delivery from Alex Hill who’s range in itself will keep you on the edge of your chair. Fat bass chugs that will have your blood-curdling, erratic rhythms and filthy as hell breakdowns that will leave your brain rattling in your skull; it’s ridiculously heavy.  Aptly named, the energy of this track definitely makes you feel like you are somewhere, amongst the dead.

Powerful and unforgiving, “Slave to the Grave” follows in tune with the first with vocals that will summon Satan himself. I kid you not, Ame Noire has really given this EP everything they’re made of and this track proves it; riffs that showcase the band’s amazing musicianship and versatility, this brilliant, haunting, melody that creeps in amongst the absolutely menacing vocals to add a little ‘softness’ to the track, also bringing out the melancholic aspect of Ame Noire’s music but only just. The concept behind the album continues to come forth through the music, this particular track referring to the dead bodies of people killed by the main character, being planted in graves tying in with the idea of a tree bearing rotten fruit. However, what really stands out on this track as well as the others is how absolutely perfect the bass is; with every minute you feel consumed by the music, so much so that you become a part of the story itself.

The next track is sure to bombard and grip you by the throat; such is the intensity of “Immurement“. With a very dramatic opening riff comes the plight and sorrow of a woman who is bereaved and distraught, emotions that reflect so perfectly in the music. ‘Crawling back into the crypt, solitude is found at the end of my wit, Incarcerate me brick by brick, So lock me in this dungeon and throw away the key‘. In a fit of dispossession, she wants nothing but to suffer and die yet regrets the abandonment of her only child.  A more melodic side is seen on this track but in spurts and disguise as the thunderous double kicks surge forth and that powerful bass tone will have you feeling the despair.  The vocals move in perfect sync with the riffs (you’ll know what I mean when you listen to it) and that was a definite highlight. Again, this is probably one of the highlights for me on the album; every member stands out with their own unique talent coming through strongly on each song. (The lyricist  would have been the perfect companion and assistant for Alfred Hitchcock).

The next track exhibits more of the band’s love for old-school horror soundtracks; mellow, creepy and ominous is what they make you think at first before “The Wayward Home” erupts into an absolutely brilliant track, one that almost seems psychotic with its sudden mood swings and breakdowns,  courtesy of drummer Aaron’s insane, unpredictable style and mad tempo changes  Bringing in powerfully melodic guitars momentarily giving you a breather, there is so much to take in on this track. Born from insanity is the child referred to in “Immurement” and here we follow his journey into decline, a child that is now destined to a fate as harrowing as his father’s. “The Tree That Bears Rotten Fruit” is a spine-chilling barrage of sounds filled with the maniacal laughter of the deceased’s offspring, and the haunting melancholia of the guitars and vocals that will stay with you for a while.

I will say this…there is no genre, no label and no epithet that can be attached to the likes of Ame Noire. This is who they are, there is no describing their way and sound. A band that has paved its path in such a short time and carved a unique niche of their own, they have undeniably proved themselves with a high standard of musicianship and their versatility. They have not followed a single style or path but followed their emotions, thoughts, an element of their music visibly significant with the vast array of sounds that they’ve inculcated into this five-track EP.  Unorthodox, thought-provoking artistry is the basis of their music; complete shock, horror or awe: that is for the listener to decide.