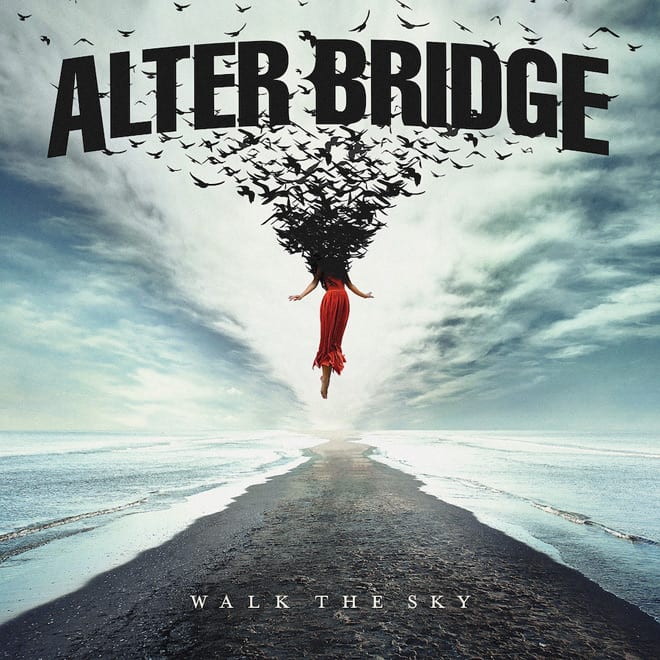 It seems like yesterday that Alter Bridge burst onto the scene with ‘One Day Remains’ their 2004 debut album, yet that was fifteen years ago! Having been a big fan of Creed, I took a keen interest from the moment I heard their debut single ‘Open Your Eyes’. Although to be honest, I have a strange relationship with quartet from Florida. They’re not one of my favourite bands, and I would choose to put a CD in the player by other bands before them. Yet they have written one of my all-time favourite songs (Blackbird), I’ve seen them live at least five times and been blown away every time, and each time I listen to an Alter Bridge album I immerse myself and thoroughly enjoy it. Their sixth studio album ‘Walk the Sky’, released by Napalm Records on October 18th, has turned out to be no exception. I immersed myself, and shit, I thoroughly enjoyed it!

Having written their previous albums together, due to touring commitments with Slash and Tremonti,  Myles Kennedy and Mark Tremonti wrote separately for ‘Walk the Sky’, then used Dropbox to share demos. “Myles and I wrote songs mostly on our own, which is different from all of the other albums,” says Mark. “Usually, we meet up, sit in a room, and create. Half of this initially came from Myles; the other half came from me. We came to the studio more organized and got to choose the best of the best material. Everything was already massaged into place and polished before we got in with the band. We were able to take an extra step to polish it further.” By the time the band regrouped in early 2019, songs took shape and they were ready to spend two weeks jamming before entering the studio, once again with their producer Michael “Elvis” Baskette.

Following the ghostly opener ‘One Life’, the trademark Alter Bridge heavy rhythm section of Brian Marshall’s bass and Scott Phillips’ drums hit like a hammer on ‘Wouldn’t You Rather’. ‘In the Deep’ is reminiscent of the work Myles produces with Slash and his Conspirators. I don’t have access at the moment to who wrote what, but I’d be amazed if this wasn’t a song Myles wrote solely.

‘Godspeed’s heart wrenching lyrics are dedicated to the memory of Mark Tremonti’s lifelong friend, Seth.  “Farewell, Godspeed, goodbye, you have lived, and you have changed all our lives”.  Fitting words to an obviously good friend.

Along with ‘Godspeed’, ‘Take the Crown’ is among my favourites on this exceptionally good album. Again, the chunky rhythm section carries it along until the melodic chorus hits all the right spots. As with the aforementioned ‘Blackbird’, Mr Tremonti makes his guitar sing at the very end like few others can. Surely he now deserves to be revered alongside the likes of Eddie Van Halen and Randy Rhoads as rock’s greatest  guitarists?

I prefer Alter Bridge when they’re at their most melodious. ‘The Bitter End’ and the album’s penultimate track ‘Tear Us Apart’ certainly deliver in that department. And, as you’d expect, they also deliver on the heavy stuff too. Tremonti sings lead on the exquisite ‘Forever Falling’, along with yet another incredible guitar solo.

‘Dying Light’ is a fitting conclusion to the journey this album took me on. As I said at the start, for me no Alter Bridge album can be taken lightly. I have to immerse myself into it to fully appreciate its grandeur. ‘Walk The Sky’ certainly extends the Alter Bridge trajectory in the right direction.