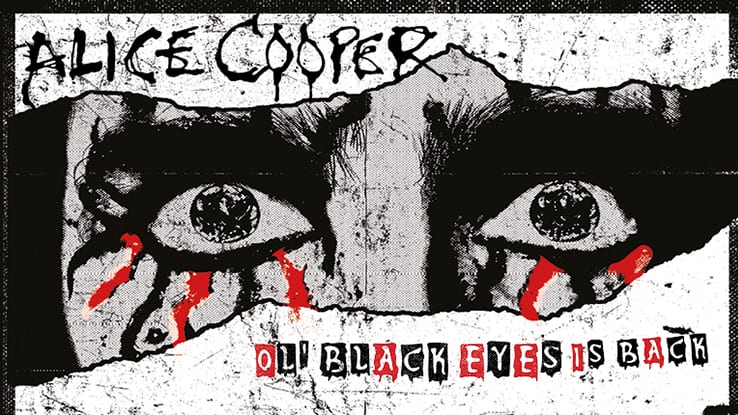 It’s clear that rock’s legends have been keeping the source of the elixir of life up their sleeves for many moons. From 76-year-old (!!) Mick Jagger’s flaunting of his sidewinder hips to 71-year-old (!!) Steven Tyler’s unfathomable vocal pipes, it’s no wonder that their crowns are yet to be swiped by younger generations of rockers. Of course, an unforgettable member of this immortal troupe is the chief Hollywood Vampire himself, Alice Cooper. On the 10th October, London saw the Godfather of Shock Rock return with his renowned theatrics for the Ol’ Black Eyes Is Back tour.

Joining the Coop were MC50, the 50th anniversary (of hit song “Kick Out The Jams”) moniker of MC5’s Wayne Kramer and his special guests (hailing from Faith No More, Soundgarden, Fugazi and Zen Guerilla), and the much anticipated The Stranglers, a line-up demonstrating the enduring enchantment of nostalgia. Strutting with groove-riddled garage punk gnarl under harsh white lighting whilst spectators scuttled into the O2 Arena like orderly ants, MC50 put up a great musical feast with tracks like “Looking At You”, “Sister Anne” and of course the commemorated “Kick Out The Jams”, yet gave a sometimes visually awkward performance that left much to be desired by those ravenous for Alice Cooper’s stagecraft.

Similarly, The Stranglers were visually unremarkable in their performance, yet this proved inconsequential thanks to their setlist comprised of iconic numbers such as “Peaches”, “Golden Brown” and “No More Heroes”. Jean-Jacques Burnel’s nimble bass lines attacked with delicious malice and Dave Greenfield’s lavish and distinct keyboard melodies scurried with verve. A couple dutifully bopped up and down like whack-a-moles throughout the entire set, whilst one lady in the front row had truly immersed herself in the ‘dance like no one’s watching’ mantra. The O2 had kindly prepared seats throughout the entire arena for the attendees’ rock-shocked bones, but The Stranglers received a warm standing ovation.

Finally, the imposing blackened eyes befell the stage prior to the revealing of Cooper’s macabre stage set, introduced as his ‘nightmare castle’, complete with castle turret, ominous dungeon flames and impaled skulls. Opening with the juddering juggernaut “Feed My Frankenstein”, which saw the lumbering appearance of old stage-prop pal FrankenAlice, Cooper and his band of glamorously ghoulish associates established an immediate commanding presence. Cooper, dressed in hues of devilish flamboyance in the form of ruffled shirts, coattails and top hats, spat up his trademark rasp of gargled glass gullet, and guitarist Nita Strauss prowled with limber, bestial predation. Cooper and his clan worked through a multitude of infectious anthems, including “No More Mr Nice Guy”, “Poison” and “Muscle Of Love”, his lyrics delivered with twinkling mischief alongside the band’s dynamic camaraderie and interlacing trails of vicious riffage.

The set entered darker shadows with a Welcome To My Nightmare-dedicated section, which saw numbers “Devil’s Food”, “The Black Widow” and “Steven”, culminating in Cooper trapped in his famed straitjacket as we transitioned into the creeping riff of “Dead Babies” and the unsettlingly triumphant refrain of “I Love The Dead” for Cooper’s obligatory guillotine execution. Though the theatrical set weaved its way through masked murderers, corpse brides, executions and near-infanticide, the most alarming sight of all to behold was the 8-foot inflatable baby adorned in Cooper-style make-up that came crashing through the castle’s turret walls. The whole show is so exquisitely absurd, yet equally enrapturing thanks to the band’s vivaciously unceasing performances.

Teasing a finish with the clobbering percussive “Teenage Frankenstein”, which saw the indulgent return of FrankenAlice, the set’s encore encompassed the climactic rock’n’roll romp of “Under My Wheels” before the familiar ricocheting riff of “School’s Out” came bounding in, accompanied by revered original bassist and co-writer, Dennis Dunaway. The arena became a fairground of visual treats here: an unrelenting mob of mystical white bubbles that dissipated into puffs of smoke, a blast of confetti and a deluge of giant black and purple balls emblazoned with the image of the aforementioned fiendish monster baby, which spectators clumsily manoeuvred out of the arena as though they were herding sheep. “May all your dreams be horrific!” Cooper declared with droll wickedness as he bid us adieu from his microcosm of nightmares.