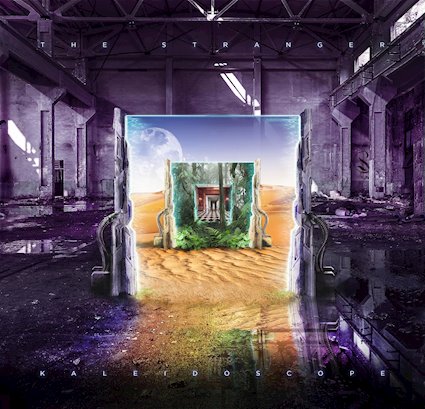 Brisbane progressive metal outfit The Stranger are definitely a band with a big future.

Their live performances are intense and riveting, with their songs and music improving rapidly with each release.

That’s not to say their songs have ever not been good – quite the contrary – but the songs collectively over their upcoming album Kaleidoscope show a range and maturity of a band far beyond their sophomore offering.

Citing their influences as Opeth and Dream Theatre there is also a healthy dose of early Butterfly Effect permeating throughout Kaleidoscope. Refreshingly these remain just that, influences, with The Stranger having enough flair and natural talent to allow their own persona to vastly outweigh any lingering influences.

The Stranger possess a unique blending of progressive metal, djent, and funk that combines beautifully together to create a swirling and powerful wall of sound that is both easily accessible and robustly apprehensive at the same time.

Their sound is very deliberate at times – which it needs to be to fully encapsulate it’s grandiose nature – but is also an eclectic mish-mash of layers and textures that draw you into an almost immersive listening experience.

Opening with “Eleventh Hour” amid a wash of symphonics and foreboding, eerie noises, Thre Stranger catch you off guard somewhat with operatic backing vocals soon giving way to a well crafted and ominous-sounding track that sets Kaleidoscope up as an epic slab of music.

“Jester”, with its bass-driven intro and guitar orientated tidings is a sporadic track of musical interludes and stripped back vocals that give the song a personal feel despite the subject matter. Punctuated by several guitar solos and soulful vocals, this track shows another side to The Stranger while never veering far from its intended path.

The short but sweet “Coming Home” is an acoustic/electric instrumental number that is haunting in its reflection and powerful in its delivery.

“Creatures In The Canopy”, with its stuttering intro giving way to a dreamy landscape is menaced by a harsh breakdown partway through before easing back into itself without ever feeling forced despite the contrasting styles contained within.

Vocalist Tom Frayne is in fine form throughout the whole album, soaring majestically at points before reducing himself to crushing brutality at featured junctures, with the harsh vocals only ever used to enhance the song rather than dominate.

Personal favourites are “Jungles”, a stuttering and stagnated guitar-driven number that gives way to a sweeping rock number before being hijacked by a blistering solo around the four-minute mark – where most bands are looking to wind up a song – but this is the point where The Stranger kick into another gear.

Their songs are brilliantly crafted and sweepingly effective, with nearly half of the nine tracks coming in at the six-minute or more mark.

“Siren” is another great rock number that is highlighted by an outstanding vocal performance from Frayne, speeding up and pulling back at irregular junctures before descending into a funk metal breakdown towards the end that makes this the perfect introduction to anyone yet to experience The Stranger.

The Stranger have hit the mark with Kaleidoscope and thoroughly deserve their growing reputation. One to watch!

Watch “The Gemini” below: