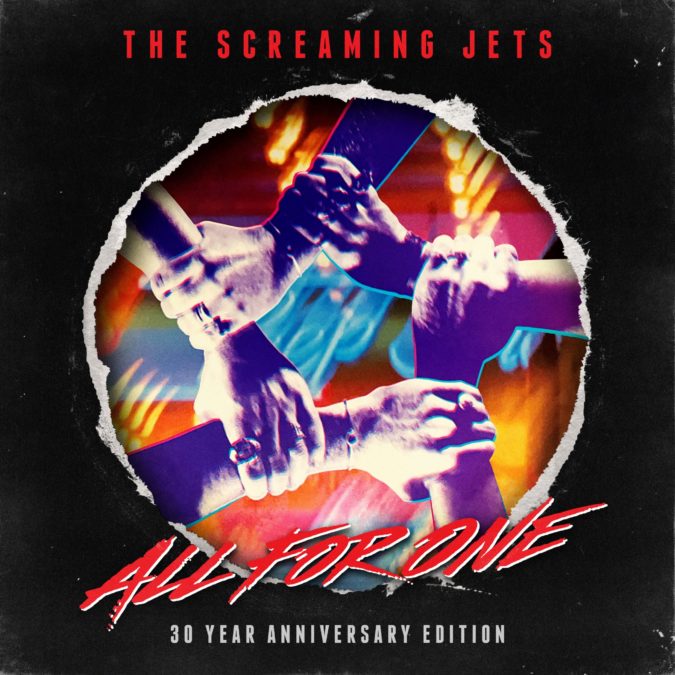 Album Review: THE SCREAMING JETS ‘All For One 30th Anniversary Edition’

The adage Dirty 30 is no longer a myth or potential term of endearment thanks to Newcastle born Australian rock outfit The Screaming Jets who have ushered in the milestone somewhat quietly thus far, but you just know it’s only a matter of time before the celebrations kick into overdrive.

Thirty years ago this year five young Novacastrians tempered all of the rage and angst the world had thrown at them and manifested that into what would become one of the finest debut rock albums released in this country – if not the world at large.

When The Screaming Jets – then comprised of Dave Gleeson, Paul Woseen, Grant Walmsley, Brad Heaney and Richard Lara – released All For One in April 1991, the Australian rock scene was on the cusp of a musical revolution that has continued unabated to this day.

The band were young, brash, raw and confident, grasping their moment with outstretched arms and the unbridled passion that only youth can bring. All For One debuted at #3 and peaked one higher on the ARIA charts with lead single Better with its anarchistic undertones and catchy rock sensibilities thrusting the band into the hearts and ears of the music community and into the path of a maelstrom of intensity that saw the band quickly rise to prominence in a market they soon claimed as their own.

With a rapidly growing reputation for excess on all levels, The Screaming Jets were soon on their way into Australian rock history, propelled off the back of 12 songs that have become synonymous with the words Aussie Rock the world over.

To celebrate the milestone of three decades since their lives were changed irrevocably forever, The Screaming Jets have re-recorded All For One with the current line-up that now includes Jimi Hocking, Scott Kingman and Cameron McGlinchey, with only Dave Gleeson and Paul Woseen remaining from that time so long ago but so close to our hearts.

Overseen by original producer Steve James, the album has been repackaged with new artwork with a clear reference to the original and will be released on August 13.

While some out there – and there’s always at least one – that will bemoan the fact the original recording has been bastardised and should never have been altered under any circumstance, the true fans of The Screaming Jets will welcome the concept and treat it for what it is. A celebration of the past, present, and future of an iconic Aussie rock band.

From the familiar high hat taps and guitar lead in to first song C’Mon (which benefits greatly from some extra guitar attention) to the frenetic but familiar outro on album closer The Only One, All For One 30th Anniversary Edition is a tribute as well as an improvement on the original.

There, I said it, this version is actually an improvement on the original. Sorry purists.

While changes are for the most part subtle and unobtrusive, most of the songs are altered slightly, the benefit of many years being played live on stage and countless variances of each that have not only stood the test of time, but raised the bar in the process.

Extra guitar fills are prevalent throughout without being thrown in haphazardly, with a number of new and/or extended solos accentuating the work of the original guitarists.

It is here than Kingman and Hocking add their individual brilliance to the songs, resisting any urge to overplay their hand or change the feel of the song, instead stamping their involvement by stealth rather than force or intent.

Tempo and timing changes provide subtle nuances to the songs, with, perhaps surprisingly, Better being one of the songs that remains mostly faithful to its roots.

Woseen’s backup vocals have only got better, as evident on No Point, but it is the – for want of a better word – maturity shown by Gleeson that is one of the most impressive aspects of this new recording.

He will hate me for saying this, but it seems young Dave has learnt the value of restraint and aside from an extended (and well-placed) warning before F.R.C and sporadically added vocal lines in a couple of the songs, he largely resists the obvious temptation to dominate vocally and change the much loved structure of his debut efforts.

Shine On is given the biggest makeover, with a slower tempo and bluesier reminiscent more of the live version played night after night.

Gleeson’s vocals shine (pardon the pun), with a much more blues orientated vocal delivery that channels a previously seldom heard inner Motown blues style. With extended guitar parts and additional solos this version is proof alone – if any was needed – that The Screaming Jets are vindicated in their decision to revisit All For One in such a fashion.

It is a welcome trip down memory lane from a band who have survived the many harsh lessons the music industry loves to throw at musicians. They may have stumbled on occasions but in true Australian spirit have never fallen or backed down.

The only gripe I have here is the realizing this album is now 30 years old has made me question my own mortality.

Thankfully this old rocker can still remember the words!