PROPHETS OF RAGE ‘Prophets Of Rage’ 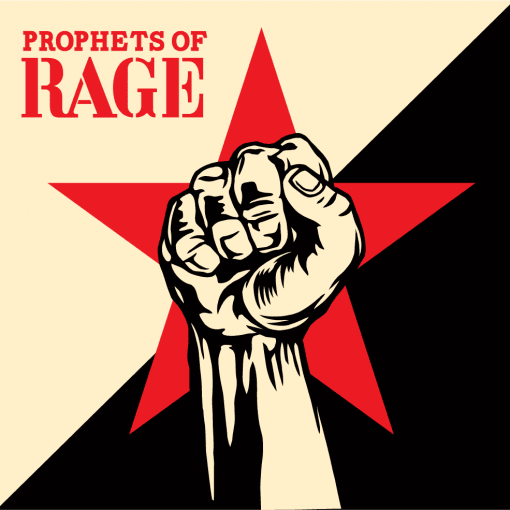 Prophets of Rage are insatiably and irrevocably pissed at the world, and they want everyone to know it. Offering up a ménage à trois of craggy bass, ’70s-inspired funk, and attitude-laden spoken word akin to Run DMC and The Beastie Boys, Prophets of Rage have boiled a blood-bubbling brew of feisty ‘fuck-you-I-won’t-do-what-ya-tell-me’ music with the self-titled debut. However, having conjured a Cypress Hill, Rage Against The Machine and Public Enemy mutant, will the Prophets exceed their past musical merits and prove themselves to be holistically superordinate to their prior musical engagements?

Whilst “Radical Eyes” opens the album with fitful arrogance, second track “Unfuck The World” announces Prophets of Rage’s full arrival and agenda in plain sight and would otherwise have been the most archetypal album opener. However, perhaps this is an articulation of The Prophets’ ‘against the grain’ endorsement. “Unfuck The World” is essentially Dewey Finn’s ‘stick it to the man’ lecture, yet articulated with a deeper growl and presented with a savage crunch via Chuck D and B-Real’s intertwining spoken word.

Meanwhile, the riff accompanying ball-breaker track, “Hail To The Chief” enters the room with extortionate conviction: turning every living head of insect, animal and man and eliciting a unanimous bow down. Particularly, after a slight loss of interest prompted by the seemingly unnecessary, but in hindsight, seemingly crafty, “Counteroffensive”. Guitarist Tom Morello’s six-stringed damsel in distress maintains her trademark presence throughout the album, entering stage left in “Hail To The Chief” for her usual rendition of ear-curdling screeches.

Presented with a delicatessen of political lyrical titbits, the mighty Prophets of Rage hammer down well and truly on the bourgeoisie. Latest single, “Living On The 110” spits at the ironic juxtaposition of the hopeless homeless who cower underneath Los Angeles’ Interstate 110 and those happily cruising within the safe confines of their shiny automobiles just above them. Here, Morello wields a violin bow, employing a trick from black magic enthusiast Jimmy Page as if in the hope of summoning the greater power witnessed in The Song Remains The Same’s “Dazed and Confused”.

On the other hand, Prophets of Rage flirt with a nippier funk groove in tracks like ”Take Me Higher” and “Legalize Me”. With references to surveillance, deceit and mistrust prevalent throughout the album, “Take Me Higher” is a culmination of these motifs that highlights the current social paranoia resulting from the over-whelming omniscience of present day governments. Whilst the Prophets’ ceaseless preaching can be wearying, it’s refreshing to hear spoken word that is stripped of underlying themes surrounding big booties and/or bitches.

The Prophets will not be able to shake the shadow of expectations cast by their former successes, but it would be wrong to ignore the legacy they have weaved and demand that a new, greater tapestry is created. Prophets of Rage has repeated history, emitting loud echoes of RATM’s The Battle of Los Angeles, but it’s a chapter of history that many will not mind perusing once more.