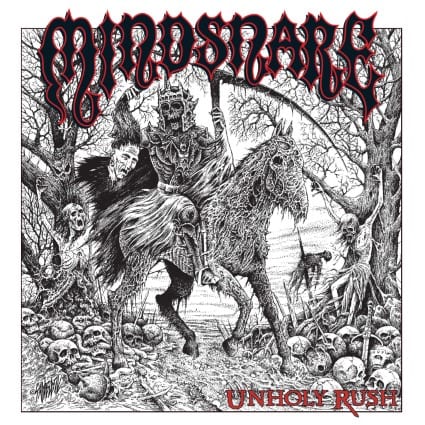 ‘Unholy Rush’ is the sixth release by Mindsnare and what a mammoth opus it is! The ‘Snare have been absent of both recording and playing a lot lately, but despite this, ‘Unholy Rush’ is one very vital and serious piece of work!

Mindsnare last album was in 2006, with Disturb The Hive, then a split EP with Ringworm in 2012. They are currently on Resist Records who thankfully see their music value, alongside other luminary stablemates I Exist, Shackles, Parkway Drive.

It was released in March but it is a release which Heavy readers still need to be made aware of. It’s not bloated by a long shot, a long time running band, held in lofty regard by a large and loyal fan base – as was witnessed at their packed April / May national launch shows – could possibly do easily and rake it in but ‘Unholy Rush’ has not a slice of fat on it. The old cliché ‘all killer, no filler’ comes immediately to mind with this flat out, well produced, pummeling metallic hardcore album.

The first track is the harbinger of the impending approach of that which is to follow. It’s a brief track of one great continuous riff and blast-beat drumming, with air raid sirens that come in and build in volume. It sends chills up your spine! The second track ‘Winter’ then just dives in and just begins slamming you to the wall. ‘Lacerate to Exist’ is a blisteringly paced tune with its splatter vocals suiting it sublimely, and, as throughout ‘Unholy Rush’, it has some great breakdowns. ‘The Inquisition’ is mind-blowingly atmospheric. It is prefaced well with the horror movie-like opening sample. ‘Witches with Blood’ and ‘Not A Lot Gets Forgiven’ are two other tunes I loved, the latter has some monster breakdowns worth special attention.

In the lead-up period to ‘Únholy Rush’, Mindsnare released two singles, and then this surprise album! The vinyl edition of the album, with great cover art by Sawblade, is a translucent, ‘bone splatter’ colour disc – already scarce and now proving hard to get, thus becoming highly sought after.

After such a hiatus this piece denotes a milestone in the Australian hardcore scene and is a prime example of a genre and scene that needs to be given more recognition.