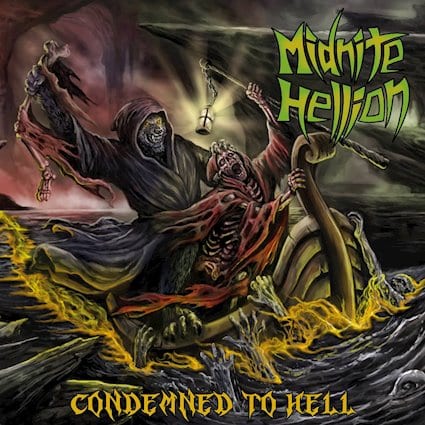 New Jersey metal trio, Midnite Hellion, are continuing on their quest to bring proper metal to the masses with their latest offering, Condemned to Hell, set to drop on September 15.

Having stepping onto the New Jersey scene in 2011, the band have supported the likes of Exodus, Obituary, Prong, and Municipal Waste, just to name a few. Drawing on influences such as Iron Maiden, Judas Priest, Motorhead, and Metallica, they are a throwback to the classic days when heavy metal was just heavy metal before many of the current sub-genres were even thought of.

Despite several line-up changes, the band hasn’t lost any of its youthful exuberance, and this shines through on “Condemned to Hell”. Combining classic heavy metal with elements of thrash, the band manages to create a sound that is menacing and addictive.

Packed with thrash riffs, heavy groove, and some classic double-kick, there is enough here to entice any fan of that old-school sound, which is embodied, in short, fast tracks such as “Cross the Line” and “Rip It Up”. While other tracks show that Midnite Hellion are more than a one trick pony. “Enter the Nightmare” is a killer track, with a mellow, eerie intro that builds into a huge thrash riff and ripping solo.

Other standouts are “Soldiers of Hades”, which has more of a hard-rock feel, “The Fever”, with its powerful groove and Hetfield-esque vocals, and the vintage riff of “The Morrigan” is a real fist pumper.

The album is closed by the rocking, and slightly cheesy “Teenage Bloodsuckin Bimbos”, which will be the theme song for an upcoming B-movie of the same name, so fans of low-budget horror films should keep an eye out for that.

All in all, this is a solid album from an up and coming metal band. Give them a go; you’ll be pleasantly surprised.