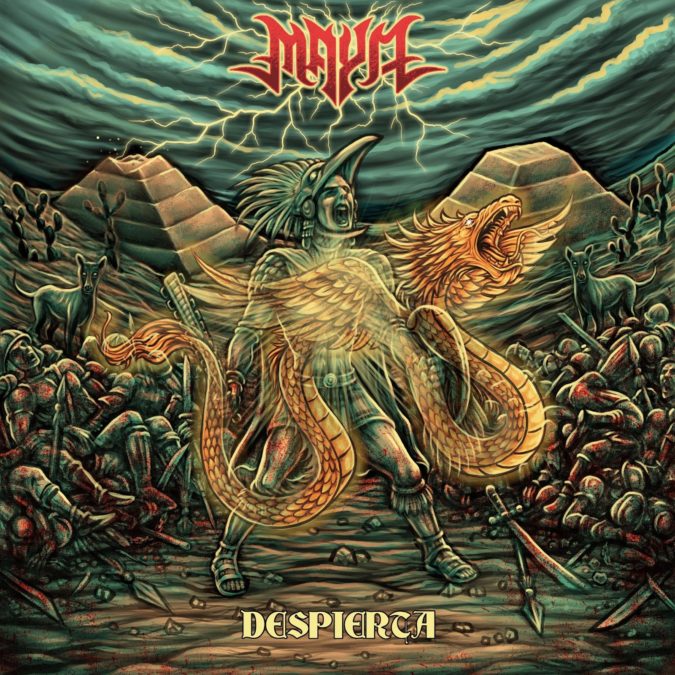 And now comes the time, the time I must review a “Hardcore” band.

You know that genre that came around during the death of Nu-Metal, where every Hardcore band sounded the same, and played the same breakdowns, but didn’t sound anything like what people would traditionally call “Hardcore”. Yeah, you know, that genre that spawned a million and one butt-core sub genres and the introduction of stylised short back and side haircuts in heavy bands? Shame on you, shame on you core kids!

All that aside, after some Spanish language samples which I clearly can’t understand which are then translated to “to die is to awaken” Maya comes straight outta the gates with a heavy as fuck slow intro which I’d probably slot closer to Slayer than any hardcore band I’ve ever heard. Then it hits your classic hardcore breakdown riff and the song ends. All this in just over 2 minutes.

Demonios hits us harder and faster than the opening track, and actually shows some signs of “Hardcore” as us older blokes would remember it. Don’t get me wrong though, it’s still ridiculously heavy and furious. In my opinion, it slots in more towards what everyone is calling metalcore these days. Before you know it though, this song is over in just over 2 mins as well, and I quickly realise that every song on this EP taps out at around that mark.

I’ve already made it through the next track Sangrando in some kind of flawless unrecognised transition. What can I say, it must have been heavy like Demonios before it and Prayers after it which is another heavy banger that I’ve just realised has finished. Two songs in six minutes, which probably could have been one banger of a song. But who’s got time for six-minute epics in these 30 seconds of fame times we live in. Well played gents!

With four minutes and two tracks left, titled Justica O Pazand Untitled I figure I’m in for a quick heavy ride out of here. And they don’t disappoint, with both tracks delivering the same furious heavy delivery of the eight minutes and four tracks preceding them. Not sure why they couldn’t come up with a name for the last track, given the time saved on writing full length songs. But hey, who am I to judge?

If you’ve got 12 minutes to spare, check these guys out. I kind of really enjoyed it despite the “Hardcore” label being thrown at it. I’d probably describe them somewhere in what they are calling metalcore these days, which seems to be anything that doesn’t slot directly into the other million and one Metal sub-genres that there now are. Let’s just call it fucking heavy and bang our heads to it aye!