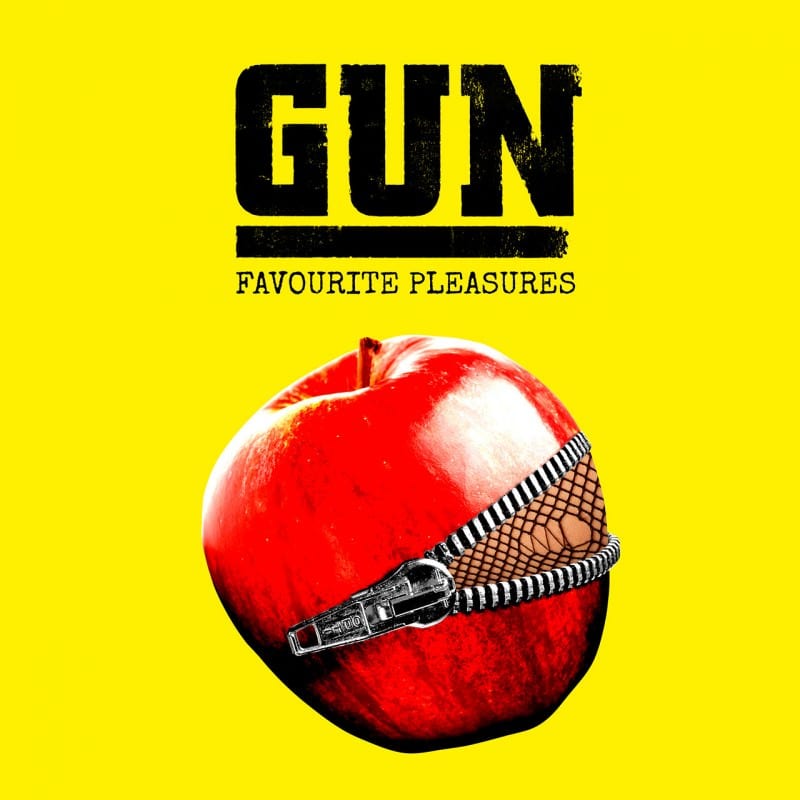 The second incarnation of GUN; GUN mark II if we’re going down the Deep Purple route, began in 2008 when the Gizzi brothers, Jools and Dante “got the band back together” after a one-off charity gig was such a success they felt they had to give it another go. Nine years later, by my reckoning GUN mark IV (mark XVIII if we take the odd bass player and drummer into account) are about to release album number seven, ‘Favourite Pleasures’.

For the die-hard fans like me who remember the magic that was created by the original incarnation on their first three albums, we know they can never be bettered. By any band at any time. For me ‘Taking On the World’, ‘Gallus’ and ‘Swagger’ are up there with ‘Back in Black’ and ‘Appetite For Destruction’ as the greatest albums ever written. They formed the soundtrack of my early adulthood and I still listen to them regularly. So I must admit that it took me while, and numerous listens to realise that ‘Favourite Pleasures’, although doubtful that it will end up in as high a regard as the aforementioned first three albums, is a cracker of a record!

I first saw new addition, Tommy Gentry (who shares guitar duties with Jools) on their UK tour supporting Black Star Riders earlier this year. Straight away I realised he could help take the band to the next level, and this album proves that he has! Tommy G (as he’ll be known for the remainder of this review) was, according to Jools “just let go on the tracks and what you hear is what he came up with, just like that!”. When you hear the opening riff to ‘She Knows’ and the outro solo to ‘Black Heart’ you’ll know what I mean. While we’re on the subject of ‘Black Heart, I have a complaint. Simon Bloor does a cracking job producing the album (as he also did with GUN’s previous album ‘Frantic’), but just as Tommy G’s solo kicks in at the end and my hairs stand on end because it’s so bloody good, it fades out! After only 15 seconds! It has the potential to be GUN’s ‘Freebird’ or ‘Hotel California’, but it fades into silence! To say I’m frustrated with every listen is an understatement! Maybe we can have an extended version on the remix of the album guys? ‘Black Heart’ is probably the nearest we’ll get to those old days of magic and could easily slot into the track listing of ‘Gallus’ or ‘Swagger’. Unsurprisingly, it’s my favourite song on the album.

Listeners to Planet Rock radio will by now have heard the title track, also the first single from the album. You’ve probably also likened it to Led Zeppelin’s ‘Trampled Under Foot’, to which there is an uncanny resemblance, but if you’re going to pay homage to a classic, yet give it a contemporary rocked-up funky sound, and include another Tommy G off-the-cuff on-fire solo, GUN’s choice of classic is pure genius! The rhythm section of Paul McManus on drums and bassist Andy Carr provide a beat that, if I was a dancer, would make me strut my stuff at every opportunity. And even though I’m no dancer, I’m still tempted when I hear this!

‘Tragic Heroes’ is another throwback to the early days and stands out as one of six or seven songs from this album that I cannot wait to hear live when GUN play a short run of three dates in December. I’ve genuinely lost count as to how many times I’ve seen them since 1989 but a live GUN set will now be all the richer for having some of these songs included.

Different people will hear different influences on certain songs. Maybe it’s unintentional but I can hear a tinge of Madness in the new single ‘Secret Lovers’ (decide for yourselves below). An up-tempo rocker that will no doubt secure some more much needed airplay from the UK’s top rock radio stations.  Which will hopefully help GUN on their way back to the heady days of MTV awards (do they still exist?) and top ten singles. Even though they would have to collaborate with Calvin Harris and five or six grime artists for that to happen these days!

Throughout the years GUN have never been afraid to try something different, and album closer ‘The Boy Who Fooled the World’ is probably their most ambitious to date. Originally a guitar heavy track, similar in feel to ‘My Hero’ by Foo Fighters, until one night producer Simon and Dante came up with a simple vocal and piano version that the rest of the band loved so much it stayed that way and made it onto the album! Again, it took me a while to get used to it but it’s a beautiful, poignant and melodic way to close the album.

This time around, GUN wanted to make a heavier album with more guitar riffs. They weren’t trying to chase trends or hoping for Radio 2 airplay, like with their previous two albums. They just wrote a bunch of honest sounding rock songs with which they are happy, and when you listen to ‘Favourite Pleasures’ honest and happy vibes shine through!

‘Favourite Pleasures’ is released on 15 September. You can pre-order your copy HERE.