[ALBUM REVIEW] DYING FETUS ‘Wrong One to Fuck With’ 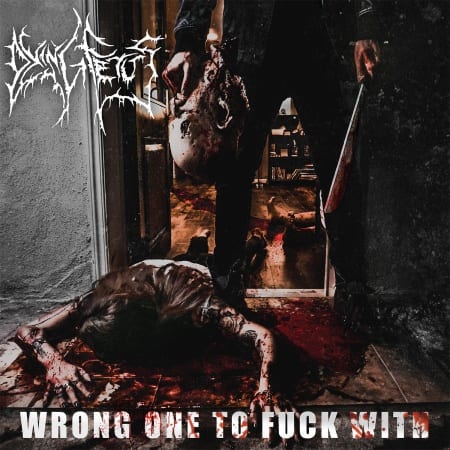 Remember that image ad for MAXELL cassettes that had the dude being blasted so heavily with awesome that it appeared his entire being was being blown backwards whilst sitting in chair from the incredible sound quality emanating from in front of him (clearly a big industrial fan!) but emulated so much excessive noise he was being thrust happily but violently backwards?

Well…(clearly with the aid of a big industrial fan) by merely listening to the new Dying Fetus album, Wrong One to Fuck With you can ALMOST experience what it’s like to be thrust backwards as such by 2017 death metal awesome. Album number eight sees Maryland’s seasoned veterans unleash a tirade of brutality that’s as uncompromising and insane as the album’s title and cover art, PERIOD!

Wrong One to Fuck With is as old school as some of the greatest death metal gets but what it contains is not only some of the most amazing production on a death metal release in a long time but the technical playing standard and quality therein is without competition or peer. I’m not talking about bedroom created, overproduced PC generated shit sandwiches. I am talking about a BIG FUCK OFF sound worthy of a genre as big and uncompromising as Death Metal and forefathers such as Dying Fetus release, consistently. Hence the little maxell reference. Wrong One to Fuck With is THAT GOOD! You are going to need a big stereo and capable speakers to give this album the credit and respect it deserves.

Wrong One to Fuck With is a beautifully brutal beast. Dying Fetus have made it a habit to draw us in with some incredible passages of pure throw down groove and then as we the listener get all intimate with the bliss and beats of Sean on Bass & Trey on Drums we are then thrown into the lion’s den forced to battle it out with the razor wire gliding talents of Mr. John Gallagher. All the while those lions are being commanded by the varied violence inducing vocals trade offs aplenty courtesy of John & Sean. You may not know or easily distinguish between the two, but does it even matter? Well, clearly when these three crazed and talented individuals (another tick in the awesome box A FUCKING THREE PIECE…WT actual F?) get together what is formulated and put to tape is pure assaulting to the senses and eardrum death metal paradise.

So many death metal albums are full of face melting moments and only that. FACE MELTING moments. Precision and technical abundance aplenty, which is of course in no way a bad thing, but it can certainly be overwhelming regardless of production, band stature, songwriting ability or talent on the instruments when that is all it is. Sometimes blast beats and finger sweeps for thirty to forty minutes is just too much to take in all at once! Yes, we love it, of course, we do. That is what draws us to the more extreme of genres in the first place but quiet moments here and there to gather our ear drums again is needed. Here is now where Dying Fetus and they’re Wrong One to Fuck With comes in. It is probably one of the heaviest albums I have experienced in the last twelve months, second only to Nails – You Will Never Be One of Us.

And one of the appealing things about this album, dare I say it, is that it could be very appealing to those fans who are yet to fully embrace Death as genre, because of the many intricacies and sheer unrelenting aspect it unapologetically emits! Dying Fetus isn’t all blast beats and Toki Wartooth finger sweeps. They are guttural, heavy as fuck groove, windmill inducing speed and vocals so deep and full of throat slitting hatred there is absolutely no reason for you amazing readers not to go to the RELAPSE site not and pre order the package if death metal is your jam.

Dying Fetus in 2017, having stamped their authority on heavy music as a whole and thanks to Relapse are about to release one of the best and heaviest albums of the year.

It is fifty minutes of forefathers of the genre putting the little kids in their box and showing them how Death Metal is done in the day and age of bedroom wannabes (they know who they are!)

And it is album titles like WRONG ONE TO FUCK WITH that proves those of us playing metal aren’t doing it for money and accolades (though in cases like these they come and are warranted). Bands with integrity and respect such as Dying Fetus consistently release slabs of extreme brilliance that is impossible to ignore.

I can’t fault Wrong One to Fuck With, so much brilliance and complexity is contained in this almost hour long offering courtesy of Dying Fetus. It is a perfectly formulated beast that will surely be celebrated and lauded within the extreme metal head community when it is unleashed upon the world on July 23rd