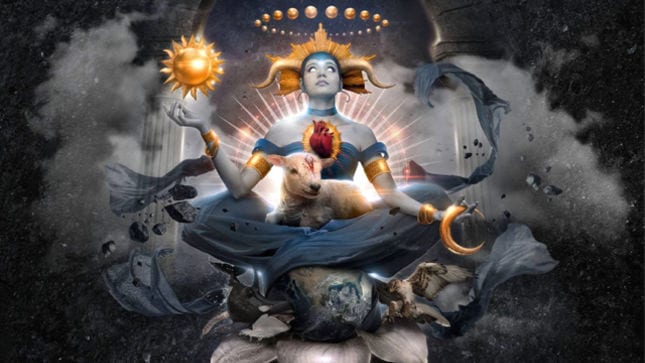 When other artists dig up old songs from their past to re-record and put on their new album, sometimes you wonder if they are lacking a little for ideas and new material. When Devin Townsend does it, you know it’s all part of his genius and his grand plan. On his new opus, Transcendence, he doesn’t just put an old track on the album, he opens with a track from way back in 1998, the mighty Truth intro from the classic Infinity album. It’s a grandiose spectacle of a track, and sets this album up beautifully, as it did for Infinity. This time it leads into Stormbending rather than Christeen.

And when most other artists get to much beyond their fifth or sixth album, they appear to start running out of what Jack Black deems to be the ‘rocket sauce’, referring to their supply of musical inspiration and ideas. Inclusive of Strapping Young Lad, I count no less than 24 full length studio albums in Devin’s career. And he keeps shaking that bottle and the sauce keeps flowing out like a tap turned to full. It really is the most fertile mind in all of music.

And that mind has produced yet another masterpiece. Transcendence is yet another magical, mystical journey into Devin’s world. That is, a world full of magnificently realised, perfectly executed progressive rock and metal music. Songs that are truly epic, powerful and ultra-catchy all at once. Music that is sparklingly produced and played with technical perfection, by Devin himself and his fabulous band behind him.

Each song is an absolute doozy, there are no weak spots, lesser songs, filler tracks, whatsoever. Each track takes you to a brand new place on this epic voyage of sound. Standout amongst the standouts however, is mid-album showstopper Higher. Starting out with some sweet acoustic lines and angelic, ethereal vocals, the track explodes into grandiosity about a minute and 20 in, and takes the listener into the musical stratosphere for almost 10 minutes. The title track is a gothic, orchestral masterpiece too. Closer Transdermal Celebration opens like a down home country track (and we know that Devin loves his country music), but quickly becomes a big-rock singalong, in the way only the Dev can do of course, with a wonderful, wistful ambient section in the middle. Second single Secret Sciences is an atmospheric stomper, is that makes any sense at all, and is very, very cool. Hell, they’re all bloody good!

Another interesting tidbit. Nine months or so back, I watched Devin write and develop a song completely live in an online stream on a website called Toontrack. Watching the genius unfold before your very eyes as it was happening was fascinating, and that song has shown up as Stars on this record. And, wouldn’t you know it, in its final form it’s amazing!

My only tiny beef is that the luminous presence of Anneke Van Giersbergen isn’t quite as strong as on previous albums. She’s there, providing her wondrous backing vocals and harmonies, she just doesn’t have quite as much to do on this album. She has virtually no lead lines, which I have very much enjoyed on albums like Addicted and Epicloud. But you can’t have everything I suppose, and Devin’s albums come as close to giving you everything as can possibly be imagined.

Devin Townsend can do no wrong. He has nary put a step wrong in well over 20 years, since he stepped up to the mic aged 21 for Steve Vai on his cult classic Sex and Religion album, and Transcendence is yet another high quality step in the musical journey of a million miles that this man is on.