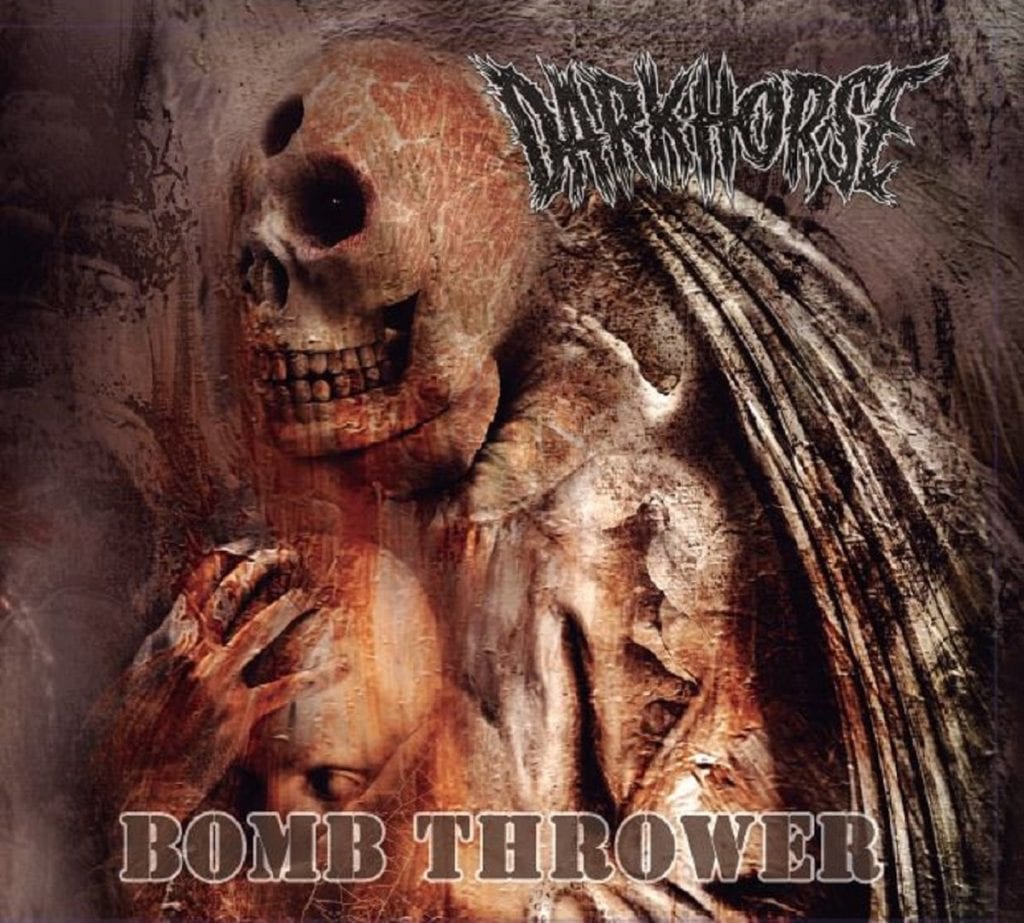 CD & Cassette Out Now. Vinyl in May

DARK HORSE reign down in a fury with the incendiary Pulling Teeth for Nothing. The Muffled sounds of forced-against-the-wall thrash can be heard charging down the hall towards you. The sounds turn the corner to your room, the second speaker takes a hold, putting the listener into place. Kicking off their second album in style, which is strictly on their terms – screaming in your face with a generous blend of crust, hardcore, and grind thrown in. It’s a bastard mix which works sublimely well! Two years on from their debut, Sick of Living, High on Death (2014), Bomb Thrower is a glorious return.

Bomb Thrower captures the sick Dark Horse live sound as you can almost feel the flecks of spit flying from the singer’s mouth at you from your sound system, and the heat off the bone crunching energy these four guys are piling into their instruments to provide this sonic feast. It was recorded and mixed by Jason Fuller, (Mindsnare, King Parrot, Monarch, and Summonus, etc.), and mastered by Jack at Enormous Door (Dark Throne, Anti-Cimex, Poison Idea).

There is something there for lovers of all punk, hardcore and metal genres with influences from Bolt Thrower, Discharge, Exploited, Napalm Death and Mindsnare. All genres collide as Darkhorse has crafted the tunes simultaneously achieving their own sound, complete with in-your-face, grind, hard hitting breakdowns, and breakneck screamo. The lyrics are intriguing, tackling politics and personal matters at the same time. Poetic, looking at war and despair, the state of the environment as well as introspection.

Standout tracks include Pulling Teeth for Nothing, Drilling for Hard Truths, Stop the Rot, Bomb Thrower (Kevin McClaer, the bassist of Massappeal, sang on this track and Terminal Capacity) Howling Our Triumph, is the closest thing to a ballad you will hear on the album. This slow burner still retains all the Dark Horse hallmarks and moves up into a higher gear before it’s close. It’s very haunting and easily most worthy its place on this opus.

Bomb Thrower will grow on the listener. If a fault was to be found, someone might say the absolute relentlessness of it but I think in the songs  ‘Howling…’ and ‘Fingerprint’, the guys have provided some shards of light in the darkness, or calm in this storm, to give some balance in Bomb Thrower.

The twelve tracks of Bomb Thrower are all done and dusted in 27 minutes! After the last song, one must hit repeat. The intensity created by the atmosphere of this album could be described as what it would be like consuming a few cans of Red Bull, two cups of espresso coffee, and going a few rounds with Ridley Scott’s Alien in a small room. Glorious, and adrenaline double plus!!

+ More dates to be added

October/November Touring Japan to play at the Asakusa Deathfest– Tokyo, and several other dates. Dark Horse will be touring together with the US band Invidiosus.