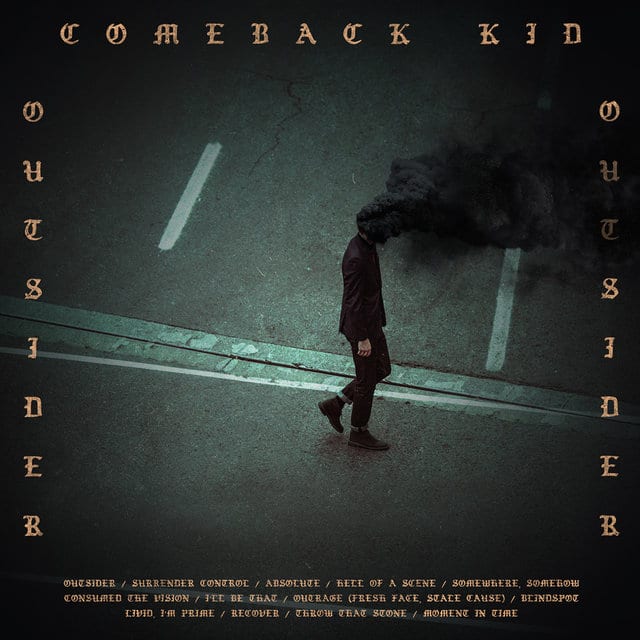 So often these days, you throw on a hardcore or a punk album, and you get a sound that is pretty much pop-punk. Truthfully, there is about as much anger on it as there is in a Disney animated film. That, or you get the opposite: where a hardcore band has pretty much delivered an album of ten tracks that virtually sound the same as each other, and they wonder why people out there just aren’t ‘into them’. Well, Canada’s Comeback Kid commonly know to keep away from those albums, and once again, they have wowed us with their new release, Outsider.

This is an album that doesn’t do any stuffing around at all. The opening title track gets right down to business with brutal vocals by Andrew Neufield and a drum solo opening by Logan Legare that warns of things to come. The unrelenting, “Surrender Control” continues the onslaught while “Absolute” not only sees Devin Townsend put his hand into the magic but also builds and builds in a way that is rare when it comes to hardcore.

“Hell Of A Scene” is pure, manic force while “Somewhere, Somehow” consist of haunting vocals that really stick with the listener. The same can be said for the closing track, “Moment In Time”, which sees Northcote step up to the mic and deliver one of the best tracks of 2017. Seriously, you will want to listen to this track over and over.

Chris Cresswell helping out on “Consumed The Vision” sees the track take a slower and gruffer route, but the pace returns with the uber-fast, “I’ll Be That,” “Outrage (Fresh Face, Stale Cause)” and “Blindspot.” And if you want angry, then just sit back and take a listen to the brief and pacey, “Livid, I’m Prime”, which delivers anger in truckloads. Then there are tracks like “Recover” and “Throw That Stone” that are catchy anthems that are sure to become crowd favourites.

Outsider is one hell of an album. Not only is it going to be lapped up by existing Comeback Kid fans but this is an album that has the potential to bring more fans into the fold as well. Sensational!