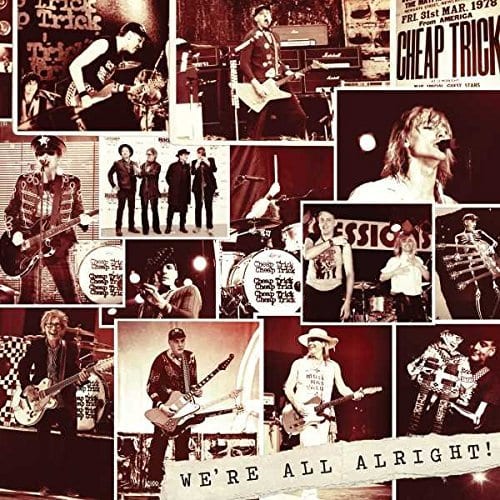 There are very few bands that can hold the claim that they are continually working and touring with the same lineup that started “back in the day”. Cheap Trick is one of those exceptions. True, they do have a new live and recording drummer in Daxx Nielsen, son of guitarist Rick Nielsen; however, they still count founder member Bun E. Carlos as a band member, and he does occasionally perform live with the band.

Founded in 1974, they are one of the hardest working bands in rock and roll today and have influenced many of the great artists we all love. Touted by many as the “American Beatles”, essentially because of their association with the late George Martin, they have produced classic album after album, and indeed, We’re All Alright is no exception. This album is not just another LP; it’s a collection of songs written by a band who still have the drive and will to keep things new, fresh, and relevant.

One could say that there is a feeling of classic Who or Ramones coming through on the album, but in fact, it’s just Cheap Trick doing what they do best. Each track drives through into the next with no long intro’s or extended middle-eights – just pure rock and roll.

Whilst some of the tunes may have been around for a while, here they get the full production and inclusion on an LP. The band sound as fresh today as they did back in the late ’70s and early ’80s, a sure sign that they are not hanging up their guitars just yet.

We blast straight in with the riff driven “You Got It Going On”, and from there on in, the riffs just keep on coming. Stand out tracks? Yeah, all of them! Check out “Brand New Name On and Old Tatoo” (what a great name for a song), the ballad “Floating Down” and the clearly Beatles influenced, “The Rest of My Life” (George would have been proud to produce this one)

Hopefully, we will get to hear what these songs sound like in a week or so, when Heavy will be publishing a full review of their Manchester gig.