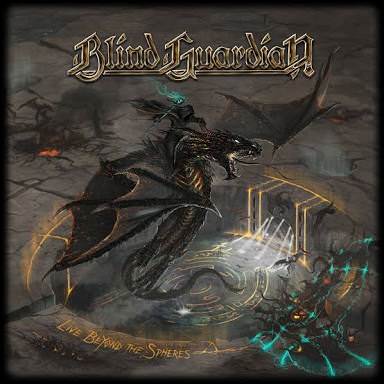 Is there such a thing as TOO much Blind Guardian?

I didn’t really think it was possible. I mean, what a great band!. Blind Guardian are without question one of the founding fathers of power metal. Their bard and front man extraordinaire Hansi Kürsch have been creating, writing and dramatically recording albums full of heavy metal classics to critical worldwide adoration. Sword & Shield filled fantasy’s reimagining the brilliance of Tolkien and his ilk and today the likes spawning George R. R. Martin and before him, Robert Jordan. Whether or not they are influenced by or draw inspiration from the magnificence of Blind Guardian they are clearly the soundtrack for the future of days and fantastic tales of yesteryear.

All of these allegorical words and references are I think necessary to perfectly describe how we feel and listening to Blind Guardian.

Spawning in 1984 and thanks to their 34-year career, Blind Guardian have released ten studio albums, each telling a story of epic, colossal proportions. It is a band such BG, that although they don’t re-write the history books per se, they do indeed massively up the ante for other bands to lift their songwriting brilliance. The likes almost only matched by the colossus Amon Amarth.

Having said all this now, I am trying to give you all a little insight into how massive this release Live Beyond the Spheres is. When I first heard that this massive release was three albums, twenty-two songs long and clocking in at a mere 2hrs & 39mins I was hesitant to ignite the flame that is Live Beyond the Spheres because rest assured it was a path that the faint hearted should not trek lightly.

I will admit to readers that I didn’t do these albums in one sitting. It was during the first sitting that the question was raised, is there such a thing as too much Blind Guardian. This package was recorded during their worldwide Beyond the Red Mirror tour. Over thirty shows were professionally recorded with the intention of releasing the package we are presented with here thanks to Nuclear Blast.

Rest assured folks that the entire back catalogue of Blind Guardian is perfectly represented and uncompromised and as perfectly reproduced as any fans replica medieval weekend cosplay outfit. This can be clearly heard by us on Live Beyond the Spheres as the many thousands of fans sing along with and to Hansi on classics such as “The Bard’s Song”

A package as formidable as this needed a particular amount of due care and focus so as not to taint the work so beautifully imagined by founding member, visionary and vocalist Hansi Kürsch, duly backed by guitar magnificence or both André Olbrich & Marcus Siepen accompanied by longtime drummer and multi instrument genius since 2005 Frederik Ehmke and Barend Courbois on Bass. I would say that my only real gripe with Live Beyond the Spheres is there are a few minor discrepancies with the quality of the audio between a few songs but all in all where bang for your Blind Guardian buck is at stake any die hard fan of one of the true kings of power metal and their fantasy scribed and recorded  visions of grandeur you will part with your pieces of silver and gold gladly.