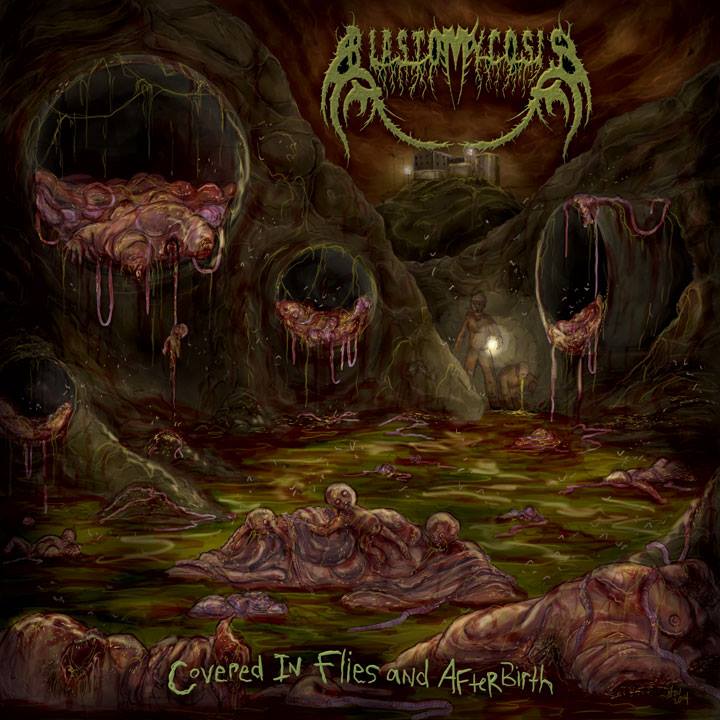 This album brings forth the glory days of amazing old school BDM. One of my immediate thoughts of influences to Blastomycosis is the early 90s Malevolent Creation ala Stillborn and Retribution.

Covered in Flies and Afterbirth is a big fucking tribute to when death metal was pure and made no apologies for confronting lyrics, with an accompanying soundtrack from some of its forefathers: Malevolent Creation, Suffocation, Cannibal Corpse and the early Covenant and Domination brilliance of Morbid Angel!

And yes, I know there are so many bands in our realm today that try to out-gore one another but taken seriously or not, this kind of metal was the everyday soundtrack to our lives as a horror story.

What Blastomycosis have delivered with this album, along with magnificent song titles, is straight up brutal death. Almost coming across as a magnificently produced demo at times (and mastered by Dan Swanö for anyone interested), Covered in Flies… treads a very fine line between death/grind only inasmuch as the songs are significantly a few minutes longer than grind allows.

Start to finish, Blastomycosis is unrelenting. That snare of Dave Black’s guarantees the band has your full attention. The guitars of Tristan Biggar and Colin Attlesey not for one minute try to over complicate their songs, preferring only to pick with razor efficiency along the length of the album, with Peter Weinrauch’s bass discretely bottom ending the fuck out of these guttural ballads. And then there are Michael Bain’s vocals which trawl through as much gravel as he can digest to serenade us attentive listeners to such delights as Landfill of Decomposing Sluts, Sandblasted Labia Reduction or Claw Hammer Hysterectomy and let’s not leave out my personal favourite, Tsemen Tsunami for the win!

If the album cover to Covered in Flies and Afterbirth grabs your attention, it’s because it is straight up old school brutal death metal and you know you remember it, love it and you will wanna buy it.

Out now on CDN Records