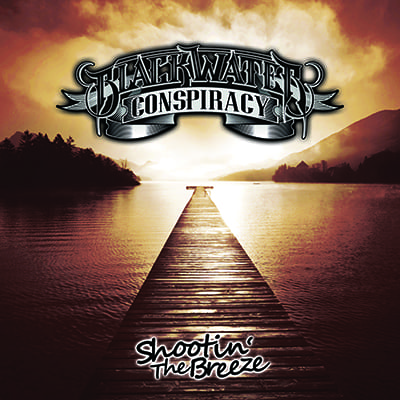 Blackwater Conspiracy promise a “unique musical melting pot” as a consequence of diverse rock influences housed within the creative drives of each band member, with inspiration spanning the likes of Jerry Lee Lewis, Thin Lizzy, The Faces and The Black Crowes. However, debut release Shootin’ The Breeze is not extraordinarily distinctive, presenting with a highly charged album that does not emanate a revolutionary stew of these various influential soupçons, but instead serves up a hefty slice of rock’n’roll as heard before in albums such as The Faces’ A Nod Is As Good As A Wink… To A Blind Horse or The Black Crowes’ Shake Your Money Maker. However, the importance of a band’s idiosyncratic motif can be queried when the quality of the music is considered – should you aim to create a new recipe for a different brand of hot sauce when an existing recipe is sufficient to ignite an internal blaze upon consumption? Shootin’ The Breeze suggests you shouldn’t.

The most noticeable flower to bloom as you observe the unfurling of Shootin’ The Breeze comes in the form of Phil Conalane’s vocals. Smoky with a hint of sweet summer breeze, Conalane offers up the kind of smouldering rock voice exhibited by rock’n’roll veterans like Rod Stewart. Conalane particularly shines in the sultry “President Joe”, an exquisite mesh of misty instrumentation and husky vocals with echoes of Humble Pie’s “Strange Days”, while “Decadent Highway” culminates in the soulful adlibbing that fully showcases Conalane’s vocal acrobatic competence. “Decadent Highway” begins with a bassy, chugging riff before unleashing into full honky-tonk ivory tinkling, demonstrating Blackwater Conspiracy’s ability to exhibit Skynyrd-type intricacies despite their smaller, five-piece format.

The pensive “Hanging Tree”, a track with the significantly respectable mission of urging help-seeking in times of mental ill health, employs a lullaby-worthy guitar riff and comprises an expansive atmosphere, which allows for the exceptional clarity of each band member’s instrumental finesse. Shootin’ The Breeze’s production is particularly sharp, even in MP3 format, whereby each constituent instrument is crystal clear, as in “Monday Club”, where the bumbling bassline can be followed as if tracing it with a finger inside the mind. The relatable “Monday Club”, which laments the struggle and strife of 9 to 5 life via a “Honky Tonk Women” groove, exhibits Blackwater Conspiracy’s aptitude for adding shimmering musical ornamentations, such as nippy guitar licks that make you nod your head in musical amen. Moreover, their implementation of sustained keyboard chords in tracks such as “Shoot The Breeze” and “Waitin’ On Hollywood” ensures that no nook or cranny of space is neglected, thus achieving an unusually voluminous texture.

You can purchase Shootin’ The Breeze NOW at https://www.amazon.co.uk/Shootin-Breeze-Blackwater-Conspiracy/dp/B06XTC6PST

Shootin’ The Breeze will be available on vinyl from the 7th July 2017.