[ALBUM REVIEW] AT THE DRIVE IN: in•ter a•li•a 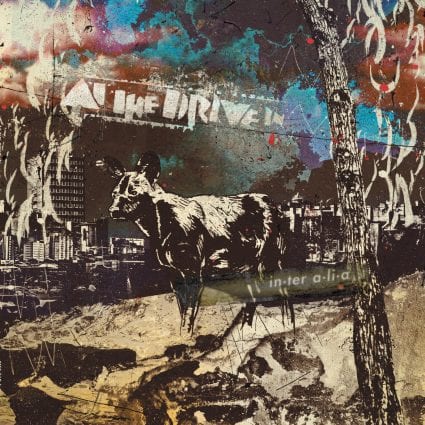 Post-hardcore outfit, At The Drive-In, left fans with their opus, Relationship of Command (2000) and it looked like they were gone for good. Just like how Refused; another Post-hardcore group left with a bang. It took seventeen years between the release of The Shape of Punk to Come (1998) and Freedom (2015) as it has with the follow-up in.ter a.li.a (2017) for ATDI.

Unlike the transition Refused took which took its time to grow on the die-hard fan, ATDI fans should be pleased after the first listen. If anything a fresh new sound and eleven new tracks from the El Paso locals show that they sure as hell deliver.

The innovative guitar playing of long-time member Omar Rodriguez-Lopez is accompanied by Keeley Davis (Sparta) as the opening riff of No Wolf Like The Present brings on the distinct voice of founding member, Cedric Bixler-Zavala.  The guitar duo is backed up by the bass groove of Paul Hinojos (Sparta,  The Mars Volta) and the tight drumming of Tony Hajjar (Gone Is Gone, Sparta).

The upbeat Continuum is a highlight with its stomping riff that gives the listener the urge to move, get down and out to the groove pumping through the speakers. Tilting at the Univendor is a standout with a catchy chorus and overpowering vocals by Zavala. The chord progression and guitar licks add a nice touch.

Governed by Contagions is classic ATDI  with spaced out guitar riffs, pummeling bass and drums of precession with more changes than Mr Jeckyll to Mr Hyde. The spoken word and bridge add to the drive of anarchy, of which ATDI are known for.

Pendulum In A Peasant Dress shows a fresh new sound that shows originality bringing back what has been missing from the 90’s. Music with a meaning is what is lacking, rather than bitching about politics important issues are touched upon particularly on the standout track, Incurably Innocent. Zavala explains that it is “a song about sexual abuse and being able to finally speak out.

The catchiness continues with Call Broken Arrow and inspiring solos to back up the emotive vocals. Passion is heard in the melodies produced here. Other highlights include the intense energy of Holtzclaw and album closer Hostage Stamps.

It’s safe to say At The Drive-In is in this for the long haul; it’s as if they never left.