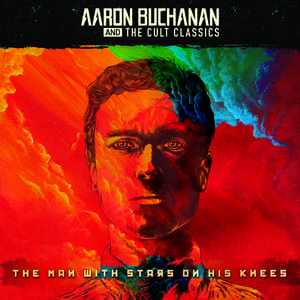 The Man With Stars On His Knees is the new album by Aaron Buchanan & The Cult Classics. Performing at Download, Camden Rocks, Wildfire Festival and Ramblin Man Fair in the UK this summer, it is an album to get you in the mood for what will be an awesome live experience. After leaving Heaven’s Basement, Buchanan formed The Cult Classics with his sister Laurie Buchanan on guitar, Tom McCarthy (guitar), Chris Guyatt (bass), and Kev Hickman (drums). He “wanted to be true to the art in [his] mind, and the sound”;“I’m proud to fly the flag for something a little different.”

What I like about this album is that it’s incredibly personal. “This album is about struggle,” Buchanan said, “brought on by surrounding yourself with the wrong people at the wrong time. What comes of that is negative energy. It’s the reason the album has such unique titles on it. “The Devil That Needs You” talks of untreatable addiction; “A God Is No Friend” speaks of not knowing what to turn to next – be it a higher force, or your next hit on whatever next passes by in the shop window of life; and “Mind Of A Mute” speaks of how judged I felt over the years, there’s so much meat to this record. I don’t believe I could have written something like this without having been beat to an absolute pulp.” Everyone who listens to this album will feel a connection to these songs. Everyone has struggled, everyone has surrounded themselves with wrong people, and we have all had that feeling of no one to turn to.

The album has hints of Soundgarden with a melodic sound that leads into some powerhouse vocals and excellent guitar riffs. It is very clever. They have their own sound, and the album offers plenty of variety, and each track is very much given its own identity. My favourite song is “Dancin’ Down Below”, it’s a ‘shout out loud’ kind of track. It makes you feel great when you sing it at the top of your lungs. Bringing it down a level too, “Journey Out Of Here” has a melodic sound that you can lose yourself listening to.

What we all have in common with Aaron Buchanan is that he “believes and understands rock music can be both an unalloyed pleasure and a conduit for ideas, a means of provoking thoughts and letting you reinvent yourself.” It’s inspired by many records, writers and voices; ranging from Eddie Vedder and the late Scott Weiland, through to Queen and Manson, yet has its own sound which makes you curious.

If you like music that can be easy listening – or you like to relate to an album – then this album is for you. Every track is different, it gives a different vibe and gives you a different feeling each time you listen to it. It’s infectious, clever, and it pulls on the heartstrings while refusing to rein in the balls-out instincts. This album will be purchased and on repeat. I look forward to seeing them live and seeing what else is next for them.