ABRAMELIN – The Philosophy of Never Having Enough Snuff 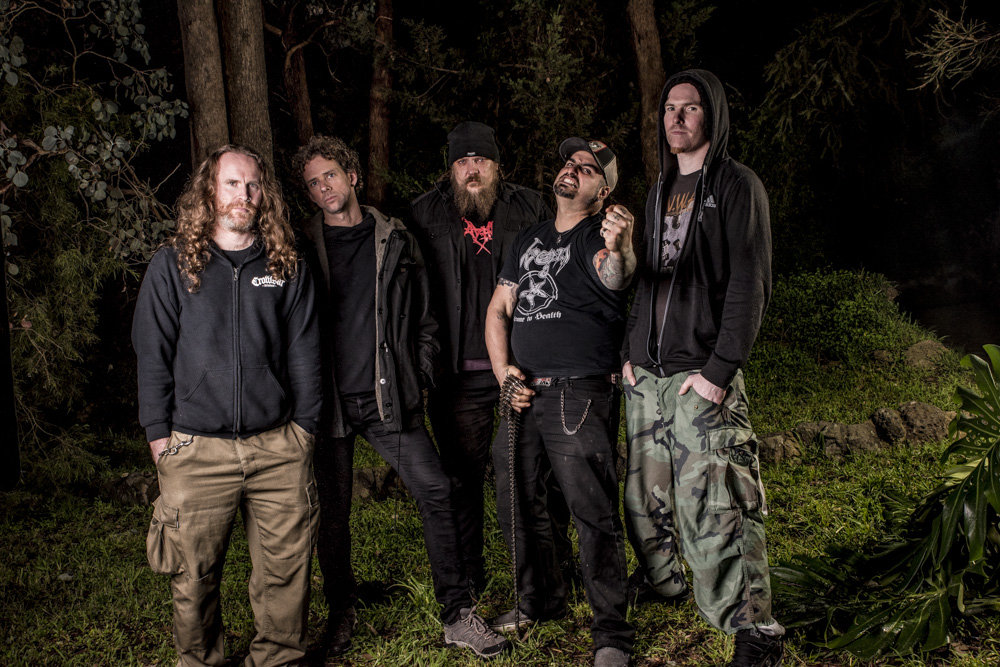 The term “Godfather’s of [insert genre here]”, in relation to Metal music specifically, is often bandied about all too freely to bands who are less worthy than others. There are few bands in Australia that can hold up to be true “Godfathers” of a genre where extreme metal is concerned. Abramelin is the one that holds that flag. Their contribution to death metal as a whole is second to none. The vocals of Simon Dower and songwriting of Tim Aldridge from their very first incarnation as Acheron set them apart from many well respected internationally recognised death metal bands around in the early nineties.

The last we heard from them was their 2000 album titled Deadspeak. Abramelin’s seemingly well-forged path for nearly a decade was cut short when they vanished into the ether of hiatus — or so it would seem to those of us who were their loyal fans.

There was never a public discussion about Abramelin breaking up, the duo of Dower and Aldridge, in their own words. “Just needed a break”.

Having not released anything or performing live for over a decade the first inkling that there was a movement within the Abramelin camp was in 2013 when a box set collection of all their works titled Transgressing The Afterlife was released.

HEAVY Magazine’s Neil “Metal V” Vance kicks off the conversation by asking what was the first discussion point that led to Abramelin perhaps considering reformation and the release of new material. Aldridge leads the conversation by saying, “We caught up for coffee and were going through all the layouts we were getting sent back from Century Media collating all the tapes and whatever audio we could find from past stuff we could find for this compilation. I explained to Simon I had quite a few songs in the bank and that I really wanted to get it going again. It came down to when we were both ready, it was going to happen but (back then) wasn’t the time.”

At this juncture, Simon continues the conversation by adding, “The focus alone at that point was very much the discography out. Trying to locate all the material that we had recorded was not that easy. I had stuff on old audio cassettes kicking around and old DAT tapes that we had to send over that they remastered for us. That was a really cool process working with Century Media, they were really good to us!”

Delving briefly into their early career and Abramelin’s debut release, the EP Transgression From Acheron and complimenting it on being an incredible piece of music and to this day an important metal release in this country Aldridge reminisces on what he was striving for early on in the band’s career and his goals as a death metal guitarist, “I was just writing what I wanted to hear and it is still exactly the same format today. I get a lot of influence from the early [metal] bands like Morbid Angel & Death.”

But, what was it he was looking for when crafting both his lyrics and easily recognisable and unmistakable vocals, “For anyone who knows me knows that I am into all things horrible. I love horror. I love gore. I love [laughing Simon continues] blood and guts and everything that goes with it and for me, Death Metal is the perfect outlet for that. There’s no other genre of music REALLY that you can express yourself in that way without, you know… people looking at you funny, whereas Death Metal it’s positively embraced. So, basically I can express myself freely with my art of wanting to be as gory a grotesque as I can without people looking at me sideways. If anything people look at me more gross and disgusting and egg-me-on saying, ‘Yeah give it heaps Brother!’ I do really enjoy that creative outlet, but that all being said even though my lyrics to a point are tongue in cheek, I do try and make them really quite gross and I do take them very seriously.”

Upon seeing Abramelin live for the first time in fourteen years, hearing their old stellar material and then the brand new track “Never Enough Snuff”, Metal V asks if returning to the stage and writing comes naturally or if he had been writing gore-filled delights during the entire hiatus, “Not at all. When we got back into the studio and started rehearsing that first rehearsal was strange, after catching up with the band again after such a long period of time and back being together in a room, and I think Spiritual (Justice)‘ [1995] was the first song that we did. We stopped and looked at each other and we were like ‘WOW’, that was good, we’re on!”

Dower laughs upon reflection of their first interaction together as a band again. On their creating of the first new song he states. “It was a couple of rehearsals in that. Tim said, ‘I’ve got a new song’ and started teaching the guys ‘Never Enough Snuff'”.

The above transcription is but only a brief fondling of the forty-minute interview so make sure you listen to the full audio interview in its entirety. Aldridge and Dower explain the whole process of why Abramelin had to disappear for such a long time only to come back far superior and more extreme than even they could have foreseen plus the full creative writing and recording process and so much more.