A Study In Humanity With GHOSTS OF SUNSET 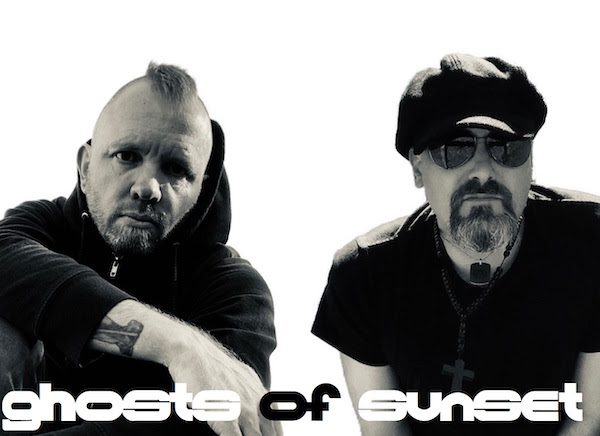 “It’s easy to put the pieces together to make an album, but when you were delivering the goods, you did that live.”

With over 30 years experience in the music industry, it sounds odd to be introducing the debut album from Ghosts Of Sunset.

Comprised of John Merchant and Todd Long, Ghosts Of Sunset released their first EP – the conceptually based Headed West – last year and introduced their thoughtful brand of rock and roll to an audience yearning for direction.

With the recently released follow-up album, No Saints In The City, Ghosts Of Sunset have ditched the concept per se, instead electing to set their album in the city of New York and tell different stories of various characters with each song.

Adding to this cohesive set of connected lives, Long and Merchant decided to use a different guest artist on each song to add a sense of individuality and separation to each thread.

Artists such as Alex Kane (Enuff Z Nuff), Scotty Griffin (LA Guns) and Lou Musa (The Verve Pipe) each impart their DNA on selected tracks, adding another dimension to the narrative.

Merchant sat down with HEAVY to discuss the album, starting with its early reception.

“It’s been good,” he smiled. “We’ve been really excited by it. We try and keep expectations pretty low, just because that starts to taint the process, right? You start writing for this and that, or try to get this reaction or that reaction, we’re trying to write some good songs and tell some good stories and connect with people that like them. We’ve been really lucky. We connected with an audience of people like us – rock and roll fans. We grew up on rock and roll and love it and wanna share it with everybody. It’s just like when I was a kid and played a record for you, I would play Hell Bent For Leather and you would go THAT”S COOL, you know. This is no different, except this time I’m playing No Saints In The City.”

In the full interview, John talks about the musical side of the album, the storyline running through it and how it can be related to life in almost any city in the world, his reasons for focusing on New York City, The guest musicians and what they brought to each song, future plans and more.