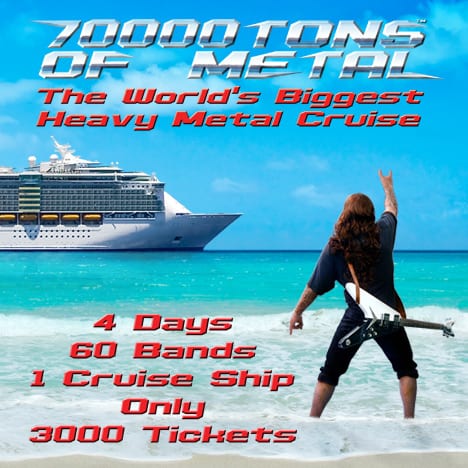 70000TONS OF METAL™, The Original, The World’s Biggest Heavy Metal Cruise, has announced the Public Sales date and the first 28 of 60 bands for their ninth voyage, sailing January 31 – February 4, 2019, from Miami / Fort Lauderdale to beautiful Labadee and back.

Only 3,000 tickets will be sold. Prices start at USD 766.00 plus Taxes and Fees per person and includes on board accommodation, access to all performances, meals, and numerous special events including meet and greets with all bands on board.

Sales for 70000TONS OF METAL Survivors (festival goers who have attended the event before) began on September 5, 2018, so limited tickets remain. Visit 70000tons.com/booking to book your cabin before they are gone.

As is customary for 70000TONS OF METAL, some of the bands will have very special performances on board:

That’s not all! There will be some more very special performances announced… SOON! For up-to-date lineup additions, please visit: 70000tons.com/artists

The newly refurbished Royal Caribbean Independence of the Seas features a host of new amenities including dual waterslides, an Escape Room and a bungee trampoline. One of the biggest cruise ships in the World, it offers guests complimentary fine dining, bars and lounges that never close, and 24 hour room service.

With eight consecutive sellouts since the first voyage in 2011, this five-day, four-night Heavy Metal Music Festival and Caribbean vacation offers 3,000 Metalheads a once in a lifetime opportunity to mingle side-by-side with 60 world class Heavy Metal bands.

Every band plays twice and you get unrestricted festival access to 120+ live performances, including the Jamming with Waters in International Waters All Star Jam, meet & greets with every band, intimate artist clinics & workshops, exclusive Album Premiere Listening Sessions and much more. All of this with no VIP areas on board makes it feel like everyone has a Backstage Pass. If that’s not enough, festival goers even get a chance to explore a Caribbean dream destination with their favorite Artists.