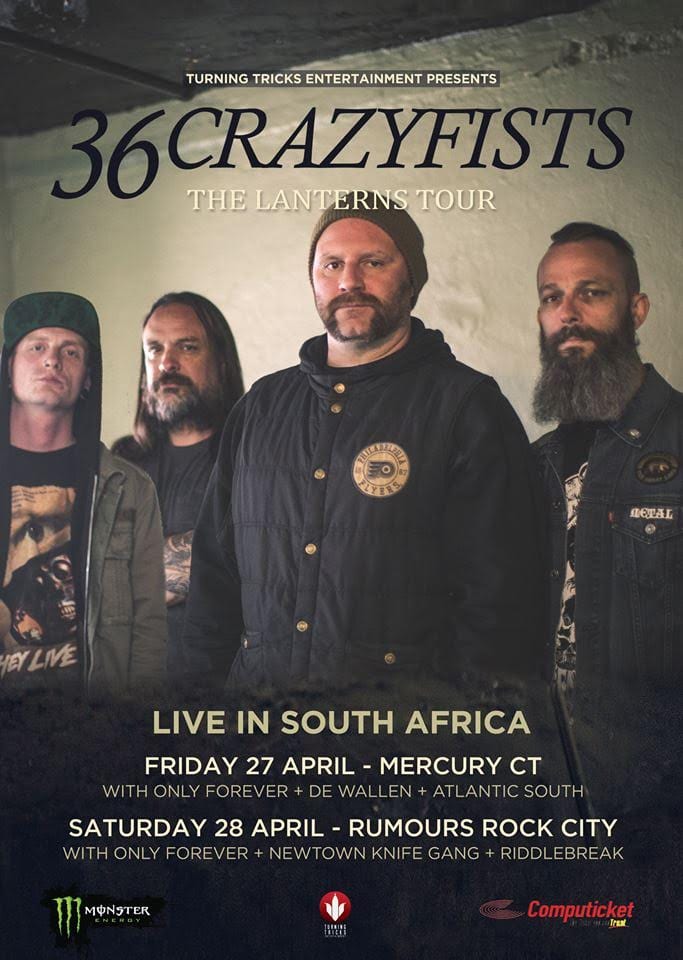 During their face-melting performance at Krank’d Up festival in 2015, front man Brock Lindow of Alaskan metal legends 36 Crazyfists promised the ravenous crowd that the band will return to our tip of Africa soon. Never letting their rabid fan base down, Brock has kept his promise and thus the band will be making their way back to South Africa in April 2018 for two exclusive club shows, namely Mercury Live in Cape Town and Rumours Rock City in Johannesburg in support of their new album, ‘Lanterns‘.

“Lanterns represents the light we all seek,” explains Brock. “These songs are all about struggling to locate it and trying to find the way to move forward and get past what has mentally hampered you in your life.”

Unbridled honesty cast in unpredictable metallic soundscapes and icy melodies has defined the veteran group since its emergence in 1994. Their journey would be earmarked by classics such as 2004’s ‘A Snow Capped Romance’. The breakout album yielded the hit “Bloodwork,” which not only featured on the Resident Evil: Apocalypse Soundtrack, but also garnered a cumulative total of 7 million streams. Along the way, the boys toured with the likes of everyone from

Alice In Chains and Killswitch Engage to Atreyu and Fear Factory. Most recently, 2015 saw the release of their Spinefarm debut, Time and Trauma. It crash landed at #2 on the Billboard Heatseekers Chart, a career high, and earned acclaim from Metal Injection, Blabbermouth, Loudwire, Revolver, and more. Meanwhile, the single “Also Am I” racked up over 1.3 million Spotify streams and counting.