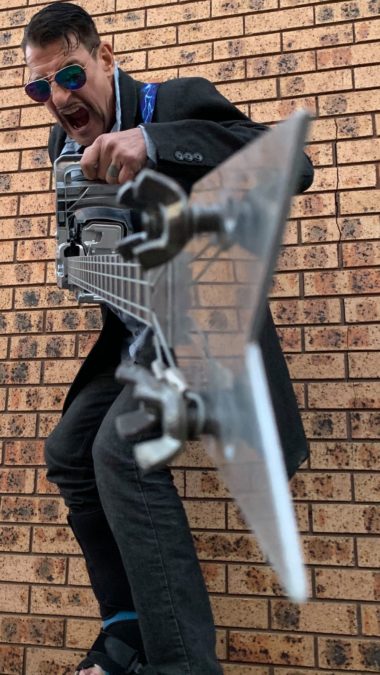 After the successful debut of 12 Rounds With Johnny Boxer last week I had to block Bobo’s calls all week just to get some peace and quiet, but in typical fashion the great man somehow got through to answer more of your questions this week including What his first tattoo was, how closely he relates to his famous namesake, where he thinks his character should go on Fat Pizza, what shouldn’t go on pizzas, and some awkward relationship advice.

Listen on to hear his outrageously funny, but somehow informative answers. If you have a question for Bobo send it to [email protected]

A boy was born in Haifa, Israel 1959 to Kazimiera and Marcus Bokser. They married in war torn Warsaw, Poland circa 1956 after Marcus (a shoemaker who ran his own shop) hired Kazimiera as his assistant on the same day she’d walked in to purchase a pair of red shoes.

Five year old Johnny (Janusz in Polish) arrived in Australia as a refugee with his parents first staying at a detention centre in Bonegilla, Victoria then transferred to Villawood,NSW.

Settling in Campsie, JB’s parents worked hard, eventually purchasing property and setting up a secure position in the community. Kazimiera involved herself in local church activities such as teaching scripture and singing in the choir as well as nursing while Marcus ran his hand crafted shoe business from Circular Quay and became a well known identity some would refer to as a ‘philosopher’ at the Campsie Hotel. Johnny refers to his dearly departed mother and father as ‘an angel’ and ‘a cutthroat but true gentleman’ respectively. And boy did they know how to dance…

Johnny followed in his parents footsteps regarding work ethic, busying himself from the age of 7 with jobs such as paper and milk runs, delivering pharmaceuticals for a chemist and sweeping the local cinema and ice rink.

While attending gigs in his teens JB met a band promoter who took him on as a roadie where he toured with the likes of AC/DC, Sherbert, Hush, Rose Tattoo, The Southern Star Band, The Who, Black Feather, Status Quo and Pink Floyd just to name a few.

Boxer (his better known stage name only slightly changed from its original) also worked as a bouncer at the State Theatre and various clubs/strip joints throughout Sydney’s notorious Kings Cross.

From there, of course, he became the worlds most feared pizza chef, Bobo, in the hit TV series Fat Pizza.

This was just the beginning of what JB refers to as his magic carpet ride through life.
Weighing in now at 61 years he sure has a story or two to tell.

THE CASANOVAS Introduce Us To Their Reptilian Overlord

This Goes To 11 With VOID VATOR

DEATH DEALER Hold All The Cards