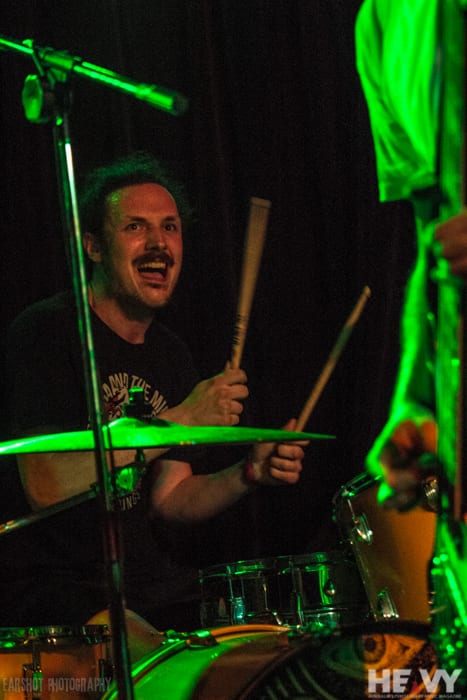 When I think of Greece, images of ancient ruins, stories from Greek mythology, and the idyllic holiday destinations of the Greek Islands come to mind. The furthest thing from my mind is stoner rock. But, great riffs know no boundaries, and hailing from the Greek village of Chiliomodi, stoner rockers 1000mods have been cranking out their groove infused fuzz for over a decade. Having supported the likes of The Black Keys, Mastodon, The Black Angels and Graveyard, the band are in Australia for the first time, and the SOLD OUT sign is officially up for tonight’s show. While The Factory Floor isn’t the largest of venues, it’s GREAT to see a full house on a rainy Thursday night!

Kicking off proceedings, local heavy hitters Astrodeath. For a two-piece band, their sound is huge, and the crowd got right into their punchy, powerful rhythms and heavy, sludgy riffs. I was mesmerised by the flow of Yoshi’s drumming, and the chemistry between him and guitarist/vocalist Tim is undeniable. They seemed to be having as much fun as the punters, enjoying a few ales, Tim even cracking one open with his forehead. There were plenty of heads nodding and bodies moving during tracks such as “Cosmic Outlaw” and “Humanoid Slave”. After a brief time out for a free T-shirt draw, they closed the set with the sludge-tastic “Mountain”, which earned a huge roar of approval from the crowd.

Up next, another local band, instrumental heavy rockers Comacozer. Just as loud as Astrodeath, but with a completely different vibe, they charmed the Factory Floor crowd with their murky melodic masterpieces. Each song an epic trip that builds throughout, combining beefy riffs with psychedelic solos and a hypnotic bass groove. The audience swayed soothingly as they were overcome by the molten mountain of fuzz that slowly filled every square inch of the room.

Following Comacozer was a band I’ve been itching to see live for some time, The Neptune Power Federation. I’ve heard great things about their live shows, and I thought I was prepared for the experience, but I couldn’t have been more wrong!

For the uninitiated, The Neptune Power Federation are, for want of a better expression, an ‘All-Star Cast’ of alternative/punk/metal, featuring members of legendary bands Nancy Vandal, Frenzal Rhomb, and Mortal Sin (among others). They are a caricature of all the “EVIL” things heavy music represents…part Sabbath, part Priest, part occult inspired rock opera.

The band emerged from a cloud of smoke to kick off with a loud as fuck intro that warped the walls, shook the floor, and literally caused my entire body to convulse. Not even the trusty expanda-foam earplugs could abate the aural assault on the eardrums pumping out of the speaker stack. I’m certain that passengers on the aeroplanes not too far above us were thinking “where the hell is that music coming from”!

Then, vocalist Loz Sutch appeared, a demonic geisha in an illuminated headpiece, sipping blood from the chalice in her hand…the perfect precursor for the opening track, “Thirst For Blood”. She unleashed her searing vocals, and the crowd went nuts, with fists, horns and windmills flailing sporadically throughout the venue. They kept it going full-throttle with catchy tracks “Skies Of Sound” from debut album Mano A Satano, and also “Way Of The Wizard” from 2017 slab Neath A Shin Ei Sun. Then Sutch delivered the highlight of the set with the haunting, track “Edmunde”, building from a harrowing intro to an ultra-heavy, hair-raising finale. She left the stage and walked through the crowd during “Neath A Shin Ei Sun”, connecting spiritually with many of the punters on the floor. She re-joined the band onstage for the ripping closer, a furious rendition of the Motorhead classic “Killed By Death”, which had the crowd rocking out, and screaming along. Neither my eardrums or the vertebrae in my neck will be forgetting this set anytime soon.

After a short break to re-hydrate with a Young Henry’s, the band we were all crammed in to see, 1000Mods, hit the stage to a rapturous roar, and a few shouts of “Yamas”. Then, the opening note of “Above 179” hit the airwaves like a drop-tuned thunderbolt sent by Zeus himself! You could feel the bass through the floor, and the addictive groove of tracks such as “Road To Burn”, “Claws”, “Loose” and “Low” had the audience tripping.

What really stood out was the passion the band puts into their performance. Drummer Labros didn’t stop grinning as he pummelled his kit, combining with the rest of the band to deliver with killer precision, whilst putting their heart and soul into every song. The riffs and leads oozing with ease from the guitars of Giannis and George, morphing effortlessly with the bass and vocals of Dani to create a flawless flow of mesmerising musical mirth.

The crowd went to another level during “Electric Carve”, and the Kyuss influence shines through in “El Rolito”, both songs containing banging riffs that fill your ears with fuzz, and your veins with adrenaline. But the biggest cheer of the night was reserved for the trippy, heavy, psychedelic odyssey, “Vidage”. They closed the night with the “Super Van Vacation” from the album of the same name, another epic track that ebbs and flows seamlessly between heavy and melodic, with an epic solo of psychedelic shredding. The band thanked the crowd, and the crowd thanked the band with huge, appreciative cheers.

1000Mods use vintage equipment to produce fresh heavy tunes. While they are happy to wear their influences on their sleeve, they have carved a distinct sound and developed a global following. All hail the new (Greek) Gods of stoner rock! 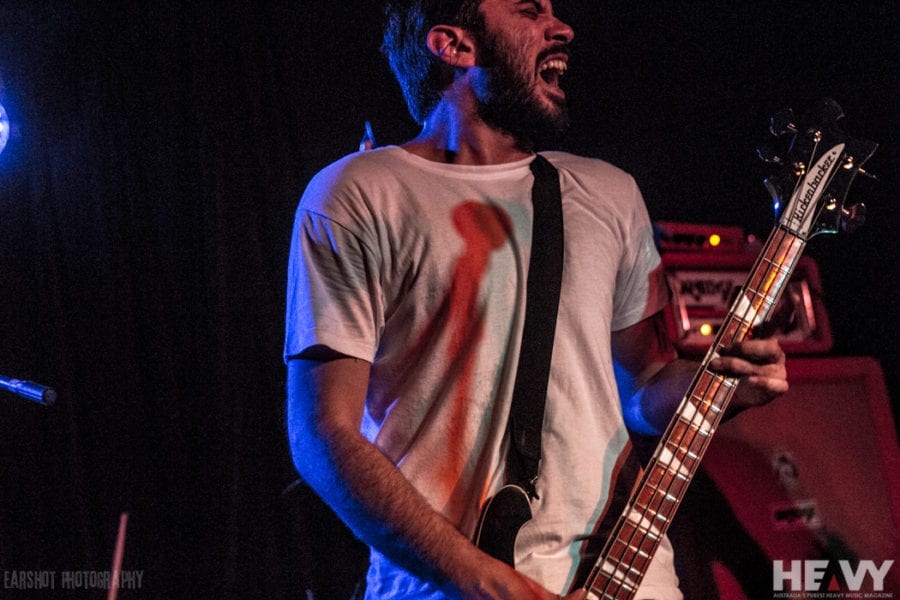 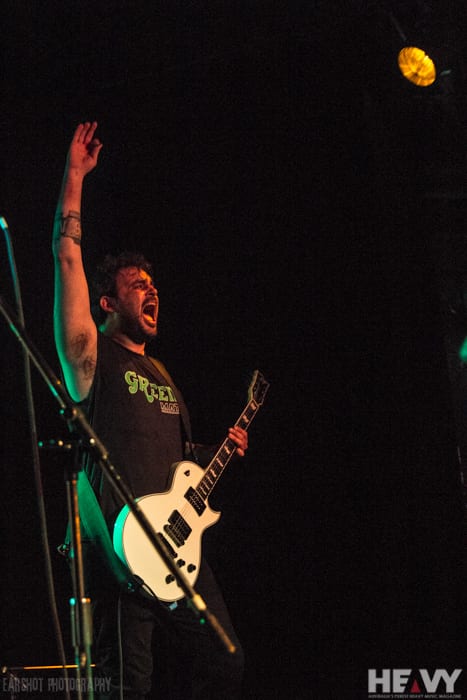 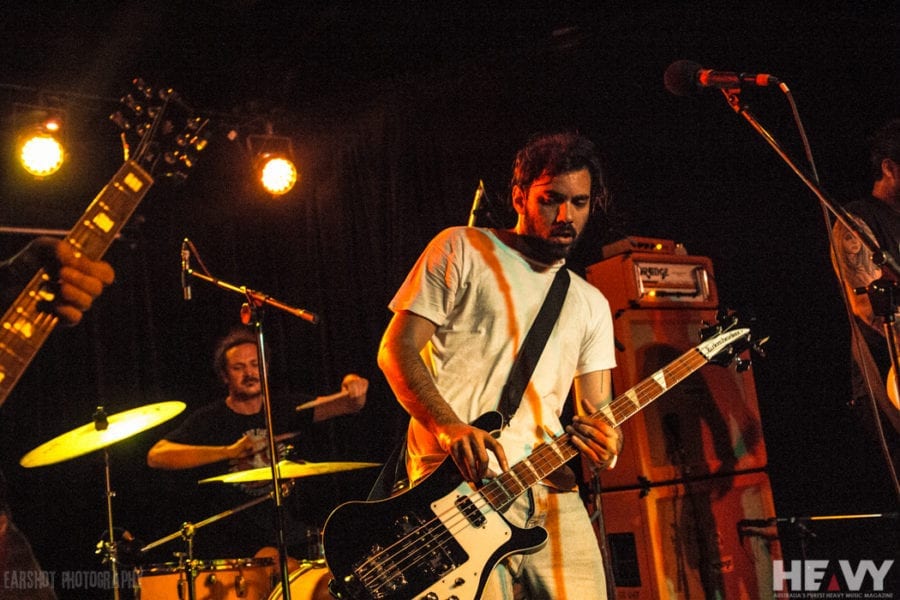 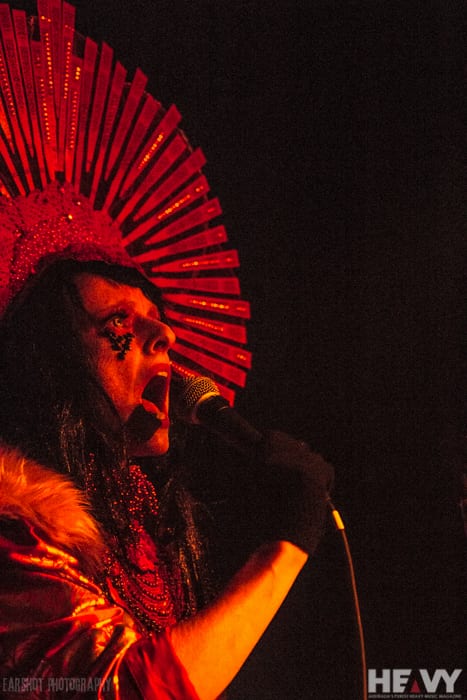 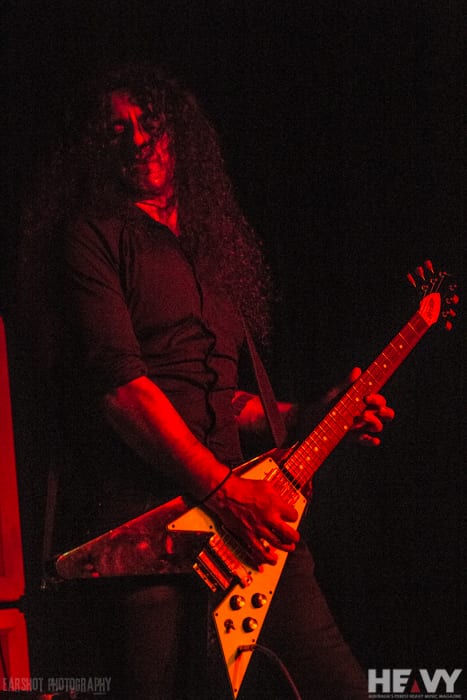 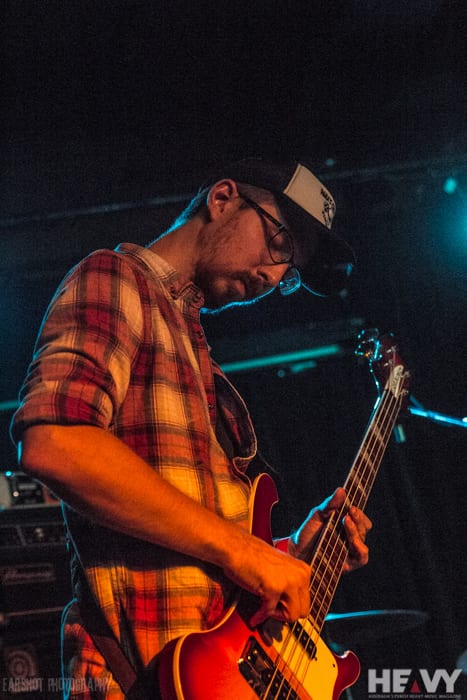 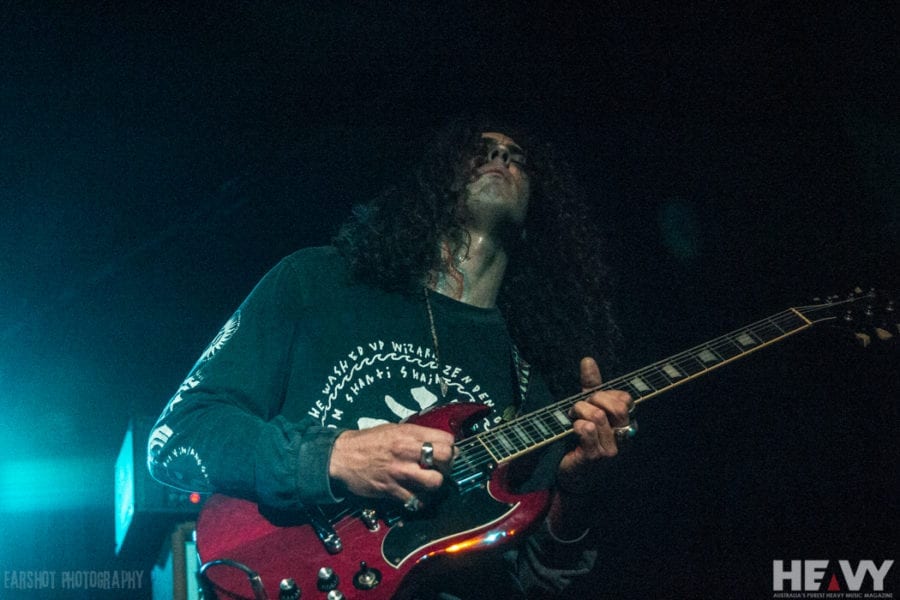 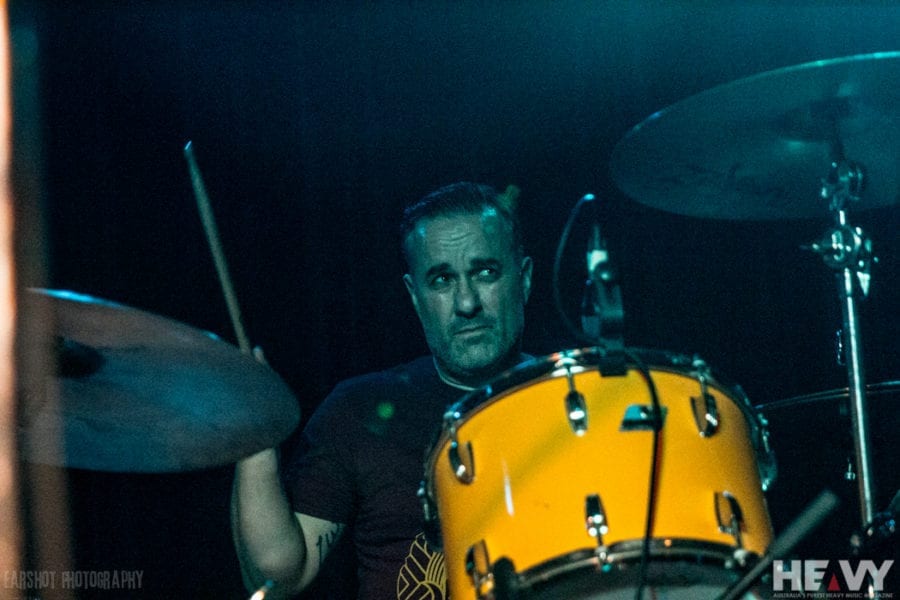 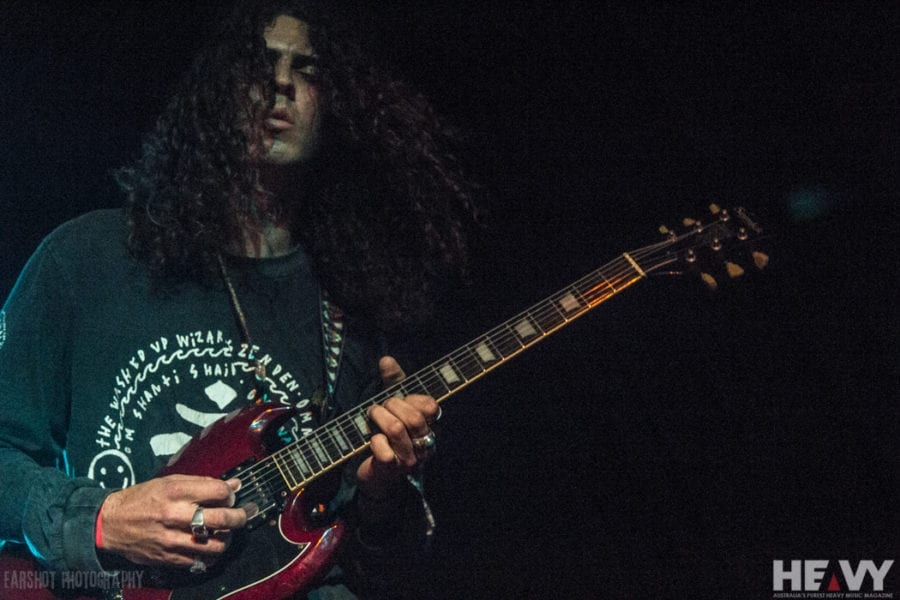 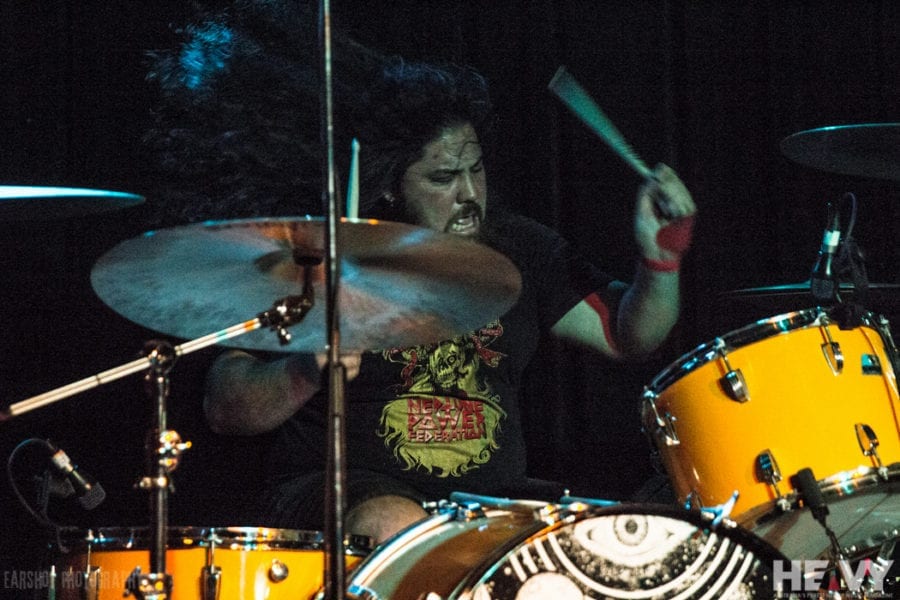 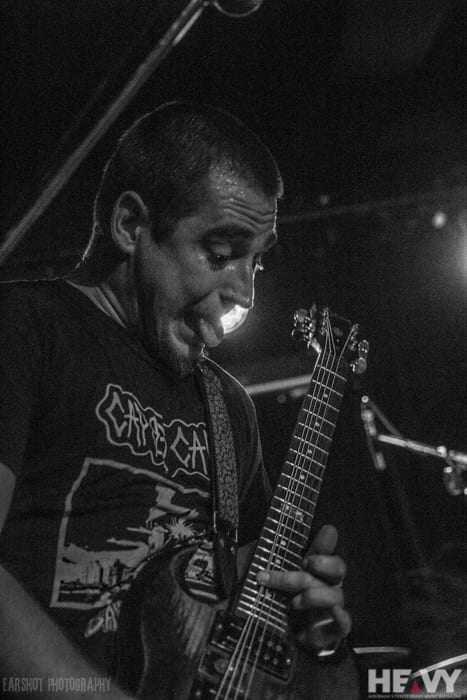 PrevPrevious.1000 Mods and The Neptune Power Federation at The Factory Floor, Sydney on 04/04/19
Next.IN FLAMES at Manchester RitzNext