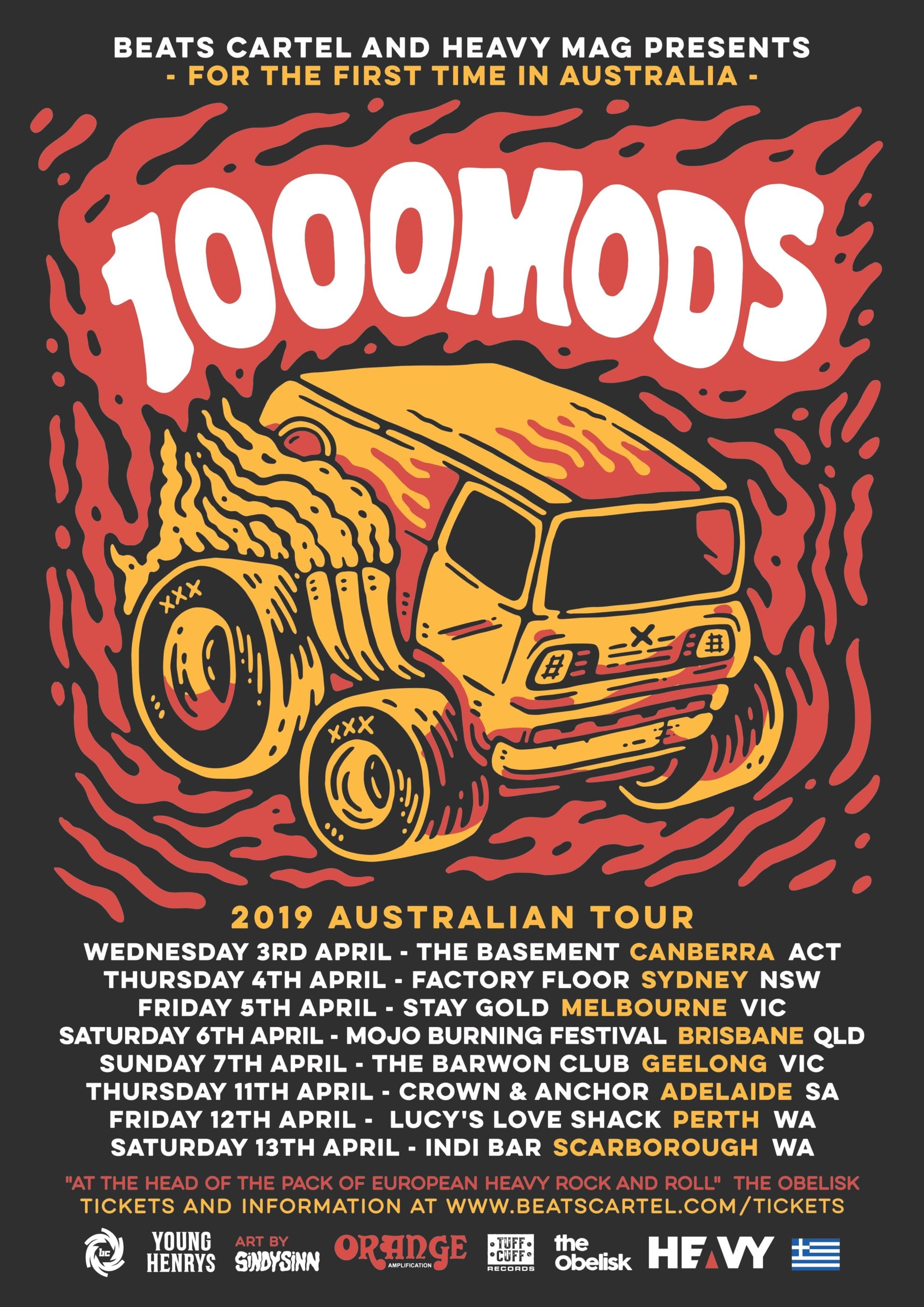 If you haven’t heard of 1000mods, let me do you the favour. Formed in 2006, 1000mods is the quintessential embodiment of the European heavy underground, proudly representing their vibrant Greek culture with a ferocious, riff-driven sound. The Greek Stoner Rock legends hit Perth streets on Friday the 12th of April as part of their Australian tour, showcasing the kind of onstage musicianship that has solidified their place on the international stage as masters of their form.

Known for their thick and heavy analogue sound, courtesy of their Sunn Model T bass amp, their psychedelic onslaught is one to be reckoned with. Their performance was memorable from the second they crossed the stage, delving straight into the kind of sound that has garnered them their 100, 000 fans across the globe. Rich, thick licks perfectly complimented their broader stoner soundscape, accompanied by the occasional punk-like inflection and aggressive grunge. With clear influences from the likes of Black Sabbath, Kyuss, and Colour Haze, they did what they do best; jam extensively, all while coaxing the crowd to serenade with them.

Musicianship aside, it’s hard not to love these guys, boasting a personality as big as their besotted fan following and a band name that is a pun on their home town “Chiliomodi” (chillia = a thousand in Greek).  Carrying the pride of their Greek origins with them, the Chiliomodi four-piece took to the stage with their familiar brand of stoner rock, tinged with the delightfully menacing vibes of their heavy rock influences. Their rich, heavy sound boomed throughout the entire venue, courtesy of the tactical audio set up (kudos to Lucy’s Love Shack), with powerful vibrations shaking the audience to their core.

The crowd were lapping up the Greek Stoner Gods as they chugged down beer in true Aussie fashion. Doomy vibes were perfectly interlaced with groovy rock rhythms and heavy blues tones, accumulating to create their internationally renowned musical anthems. A clear improvement from their earlier work, their professional growth could be heard within their renewed crisp sound and professional projection, which, while previously could only be ranked as mediocre, had taken clearly taken a new front seat. While Dani G’s raw vocal performance had the crowd enraptured in his haunting passion, the rest of the band delivered with the kind of fervour unique to those who are in love with what they do.

From their resounding hooks to their richly rhythmic guitar work, their long-faded finishes were perfectly counterbalanced by the aggressive rush that is their masterpiece “Electric Cave” (although I personally prefer “Vidage”). Their “heavier than life” sound wrapped in a psychedelic façade, betwixt haunting melodies and merciless drumming is unbelievably passionate. Turning that passion into raw power, their riffage is some of the best I’ve seen performed live, with simple, yet delightfully heavy guitar work transforming their music from one of stoner mastery to one of pure addiction.

While this may have only been their first Australian tour, they left an impression on the Perth music scene that no one else can fill. From a small town in Greece to most isolated city in the world, here’s hoping that the Chiliomodi four-piece return to Perth with another performance that transcends the international stage.

PrevPrevious.THE FALLEN STATE ‘A Deadset Endeavour’
Next.BRING ME THE HORIZON, Frank Carter & The Rattlesnakes and more at Rod Laver Arena, Melbourne on 13/4/19Next