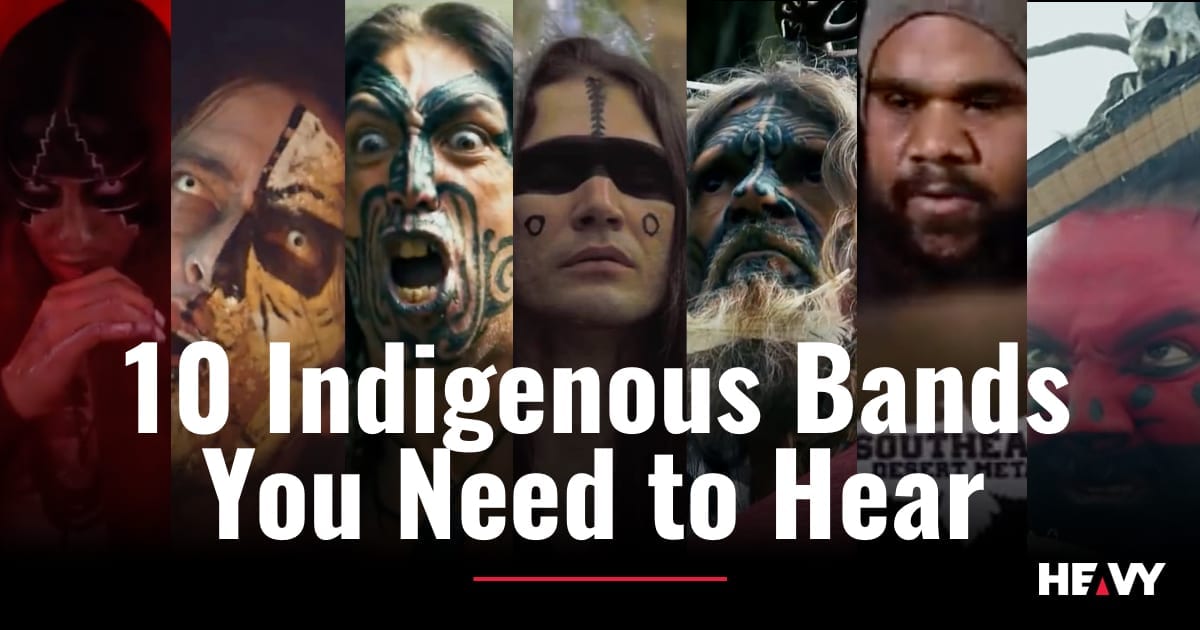 10 Indigenous Bands You Need to Hear

We acknowledge the Traditional Owners of country throughout Australia [and the rest of the world] and recognise their continuing connection to land, waters and culture. We pay our respects to their Elders past, present and emerging.

We breathe the same, and we bleed the same; we’re all metal sisters and brothers despite our race, religion or culture.

Many bands go unnoticed on this vast planet, and therefore we are often missing out on new and unique blends of tradition and modernism.

It’s essential we learn from the past with respect, understanding and forgiveness so we can move forward, together, and create a newer, better world.

Some bands draw more profound influences than others. Metal is traditionally passionate about history, justice and respect, whereas pop music tends to be shallow and focused on money and sex.

With all that deep thinking in mind, HEAVY’s decided to take you on a global tour with ten indigenous (or natively close to) bands which you need to hear, and share!

These ten artists give us a glimpse of their world with traditional and unique instruments with today’s modern electronic devices.

No passports needed for this trip. Enjoy. \m/

In 2008 Mexican natives, Tlipoca (drums) and Tecuhtli (vocals/guitar), formed the folk metal outfit known as Cemican, meaning “All the Life” in Náhuatl. Located in Guadalajara, Jalisco, wind instruments were used, making a cultural landscape within the progressive metal they had in store for the masses. Newest arrival Ocelot (Bass) has joined since 2016 with Mazatecpatl , Xaman-ek and Yei Tochtli joining in 2012, making up a choir and providing more wind instruments. Lyrical themes include Aztec-Mayan Mythology.

With two full-lengths, Ometiliztli (2009) and Estamos en el valle de los muertos Ticateh Ipan Miquixtlahuac (2012) behind there back, doors in Europe have opened up with Wacken Open Air and Download.

Most recently the single for “Guerreros de Cemican” (2018) was released and can be seen below in all its mythical glory.

There are many metal bands hailing from Brazil, with the most well-known being thrash legends, Sepultura. Forming in 2008, Arandu Arakuaa, meaning “knowledge from the cycles of the skies”, or “wisdom of cosmos”, in the Tupi language, which they sang in. Composers of heavy metal and indigenous Brazilian folk music, lyrical themes with an inspiration of indigenous legends and rituals. The values of the Brazilian indigenous people were key, as they were underrated for centuries.

Currently, independent artists, they have released an EP for Arandu Arakuaa (2012), and three full-lengths, Kó Yby Oré (2013), Wdê Nnãkrda (2015) and most recently Mrã Waze (2018) producing a single for “Huku Hêmba” with the epic video below.

Mongolian natives, the HU, which is the Mongolian root word for “Human” have created their own genre with Hunnu Rock. Mongolian throat singing is used as is the native instrument known as the Morin khuur, which has its own unique sound. Gereg is the title of their upcoming release, referring to a diplomatic passport from the time of Genghis Khan.

Two singles, “Wolf Totem” (2018) and “Yuve Yuve Yu” (2018) have been released with over seven million youtube views and counting. The later can be indulged below.

New signings to Napalm Records, Alien Weaponry come full force with thrash metal for the masses. Formed in 2010 by brothers Lewis (guitar and vocals) and Henry de Jong (drums), coming from Māori (and Dutch) descent, with several songs written in te reo Māori. Big things are ahead as they were featured artists of the Download Festival in Sydney, Australia, a sure sign of things to come.

With their first full-length, Tū (2018) the single for “Kati Tangata”, translates to ‘Eat People’; referring to the ancient Māori tradition of eating the flesh of their enemies after battle, in order to insult them. It is also an ancient term for a war party. Enjoy the driving riff which echoes the pounding footsteps of the war party below!!

Australia isn’t only known for AC/DC and Cold Chisel, whose key members hail from Scottish descent, but some incredible indigenous music from the Aboriginal community. Artists such as Yothu Yindi among others use the didgeridoo. Now think of legendary Indigenous outfit Coloured Stone, check them out if you haven’t, and imagine they were a metal band… Southeast Desert Metal is what they would sound like. Located in Santa Teresa, Northern Territory, a small Aboriginal community in central Australia, makes them the most isolated metal band in the world.

Home of the Arrernte people, Hunters, warriors and healers, Lyrical themes include that of the Dreamtime and Aboriginal mythology. The Eastern Arrernte band were signed to Alice Springs metal label The Black Wreath, after years of performing across the rigid Australian landscape.

Chief songwriter Chris Wallace passes on stories from the old to the young generation. Referring to the eagle bird, “In Aboriginal culture we have totems. And that’s my totem. I am that eagle looking down. It is something that represents us and the band. We are an eagle dreaming clan. We all follow that bird. Iron Maiden has Eddie, well, we have that eagle we follow. And that Eagle is a spiritual bird to us.”

Releases include the debut EP, Let’s Rock! (2013) and two full-lengths, South East Desert Metal (2015) and the most recent, Break the Silence (2018), with first single“Rainmaker” below.

Located in Huancayo, Peru, independent act, Indoraza were formed. Active since 1998, lyrics delve into Andean History, which stretches from circa 15,000 BCE, Myth, and War with the sole intention of paying tribute to ancestors, culture and Andean worldview. Indoraza comes from two voices “indigenous and race”. Those voices refer to the blood lineage traced to the ancient inhabitants of American ancestors.

Below is the video for “Avelino”, taken from the latter.

Arequipa, Peru, was the location where Ch’aska formed in 2002, with the name deriving from the ancestral language, Quechua, which was used by the Incas, meaning “the most shining star in the skies”. This word is especially associated with the planet Venus. Quechua is still spoken in the Andean regions of Peru and other countries of South America. Traditional Peruvian folk instruments such as the  Charango, Quena, and Zampoña are used.

Below is the most recent release, “Winter Night Heights” composed for the soundtrack of the Peruvian thriller, La Luz en el Cerro (2017).

Probably the most extreme of the list is another Brazilian band. Formed in 1999 Corubo, classify their music as Indigenous Black Metal. Singing of Indigenous Cultures, Protest and Reality, currently signed to D.T.M. Productions they have released numerous demos, split singles. three EP’s and three full-lengths. Mainly focusing on black metal numerous offerings engage ambient soundscapes for the soul.

Below is the intense video for “Jahe’Opapá”

Forming in China, Beijing in 2010, folk metal group Nine Treasures continue to sing of Mongolian folklore, using the native instruments. All members are from Inner Mongolia and sing in their native tongue. They have released three full-lengths with a recent single for “Bodhicitta”(2019).

Below is the title track from their last full-length, Wisdom Eyes (2017)

We’re sure you have discovered something new for your metal ears to feast on. Please share with your brothers and sisters these amazing bands!

Comment with any other indigenous artists we should check out! \m/

Curated and written by Matt “Boltz” Bolton and Carl Neumann

Celebrate metal and indigenous culture in the heart of Australia at the Blacken Open Air Festival! Presented by The Black Wreath and HEAVY Magazine.